♥Overview of another year on Show with fabulous results for Bakervill’s Dogues de Bordeaux ♥
DECEMBER
The last month of the year again, and we had a busy month showing our dogs, here we go again ;
December 20th 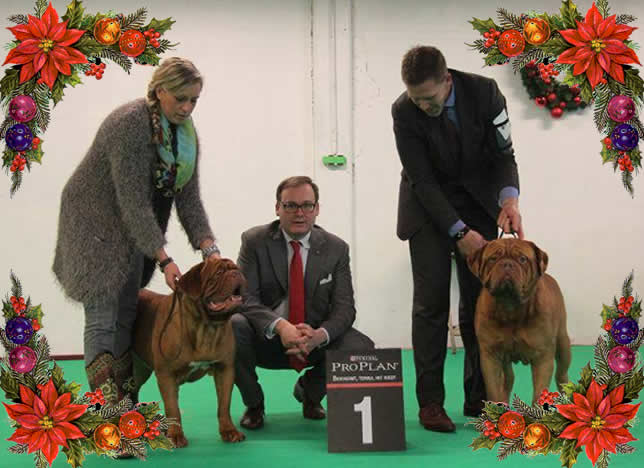 The Double we did yesterday with Snap and Pipo, well we just repeated that this day …. ♥ …. Bakervill’s Hot Chilli -Snap– became Best Male, Best of Breed and 4th in Group 2 and his beautiful sister Bakervill’s Style Honkey Tonk Woman -Pipo- became Best female. They both received the title WINNER 2014. Judge on this show was Mrs. R. Kazlauskaite – LT. 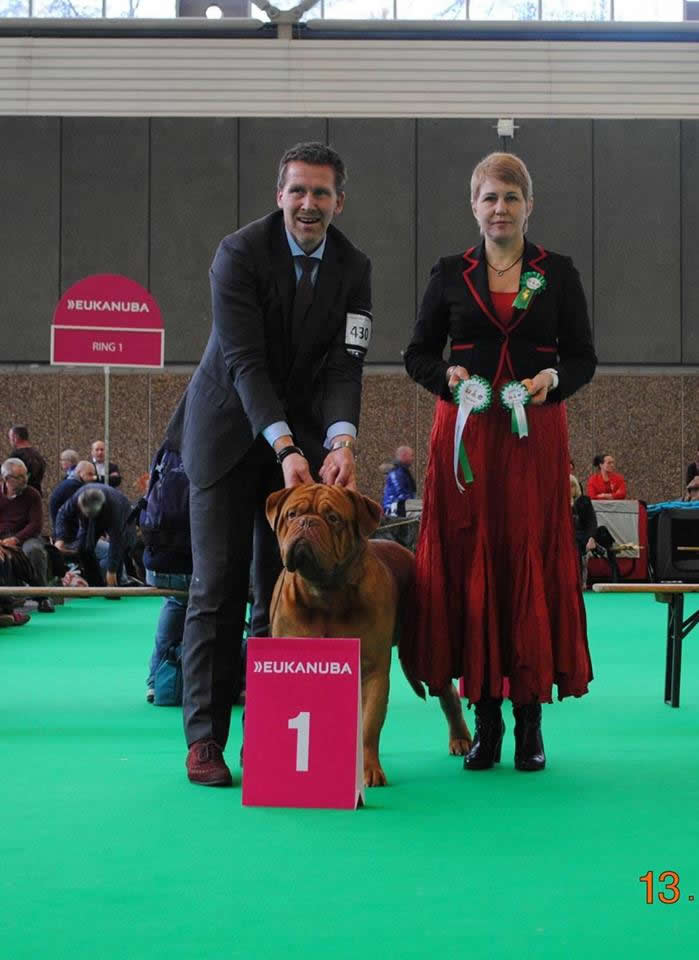 This was the 4th time in a row that a Bakervill’s Style dog won the big shows in Amsterdam with a double.

We are happy and satisfied with these results, and of course proud of our dogues!!

On the International Dogshow in Amsterdam we can only say one word …..PROUD….!! 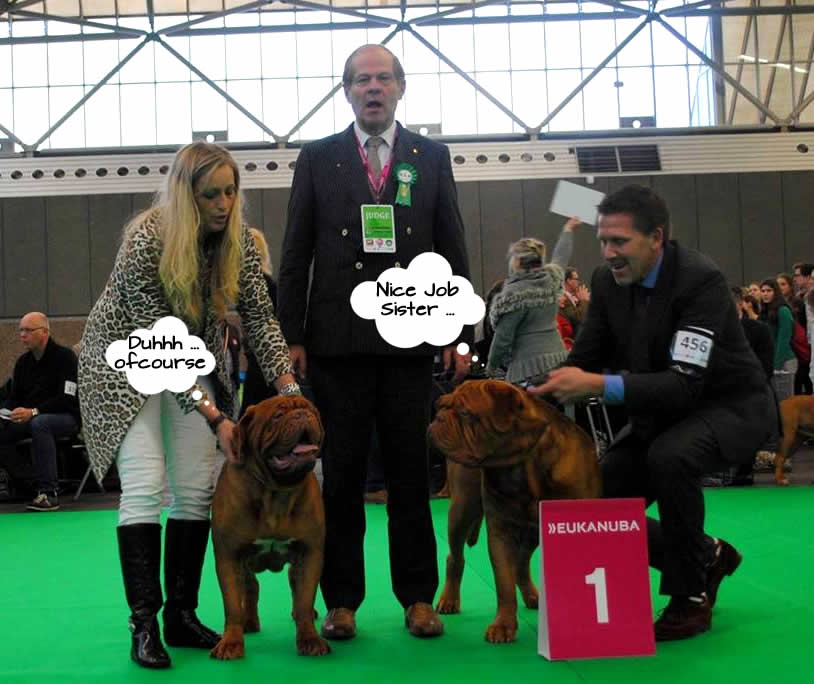 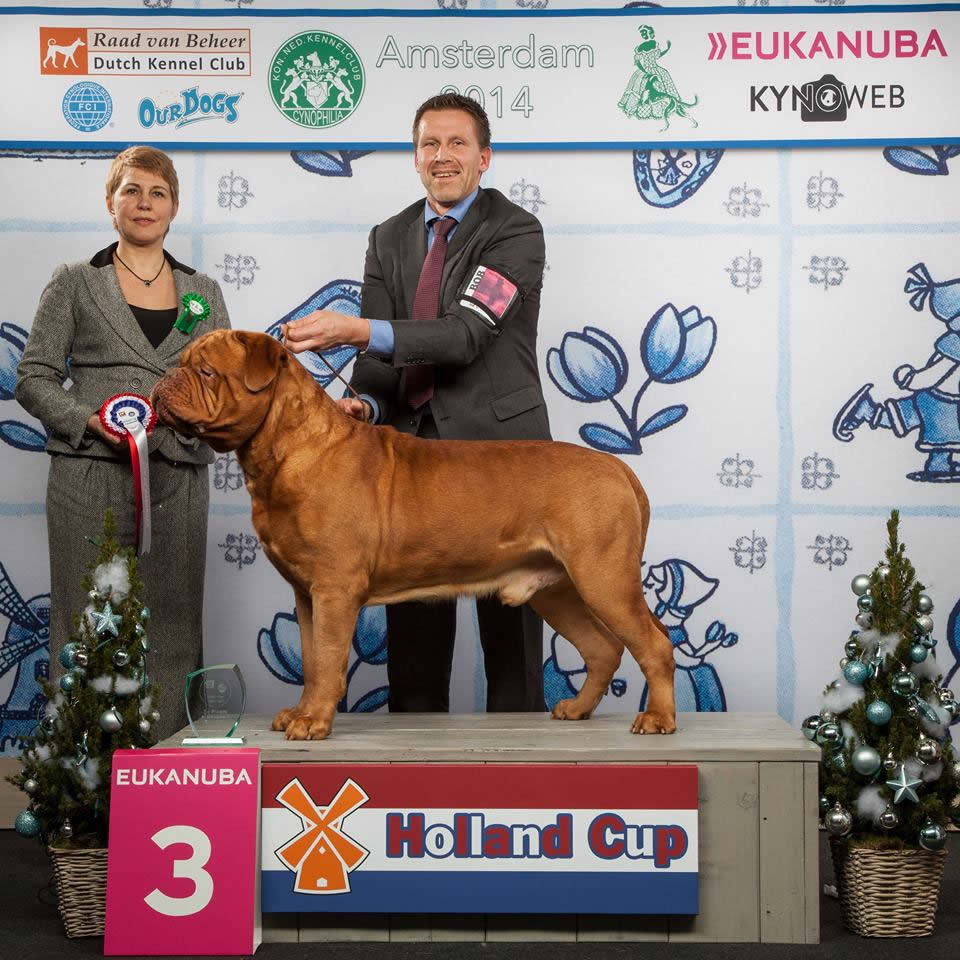 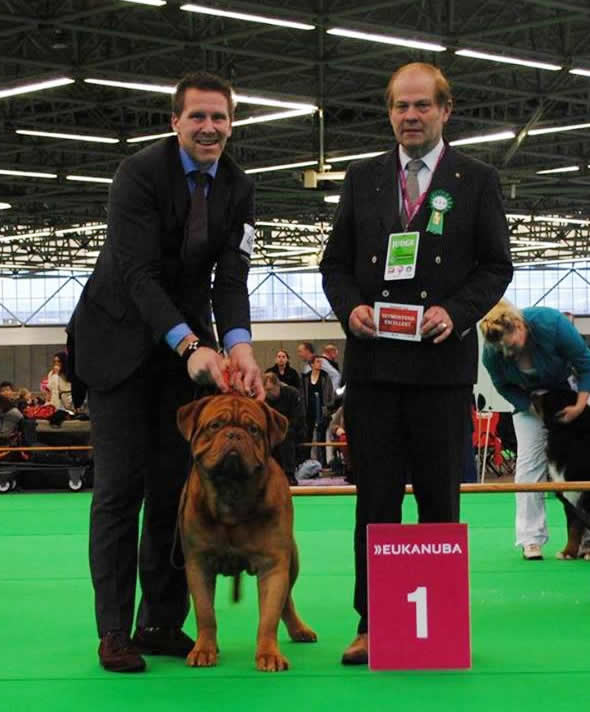 At the end of this day, in the Ring of Honor, Snap was placed 3rd in the group under Mrs. R. Kazlauskaite – LT
We thank the judges and the people who supported us today….!! 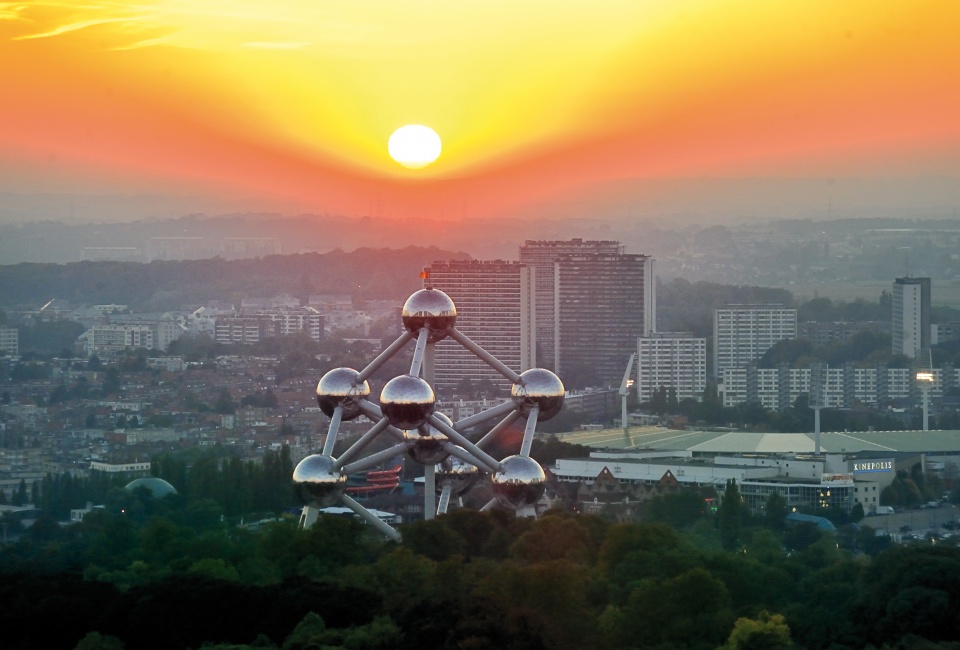 Home after a great day of showing, this time on the BRUSSELS WINNER (Belgium).
Our youngster Back to Basic from Lakki House “Pummel”, bred by our good friend Irina Lapatina,  placed first  in Junior Class Males and received the titles; – BRUSSELS JUNIOR WINNER & BENELUX JUNIOR WINNER, –  thank you honey for your fantastic work!! 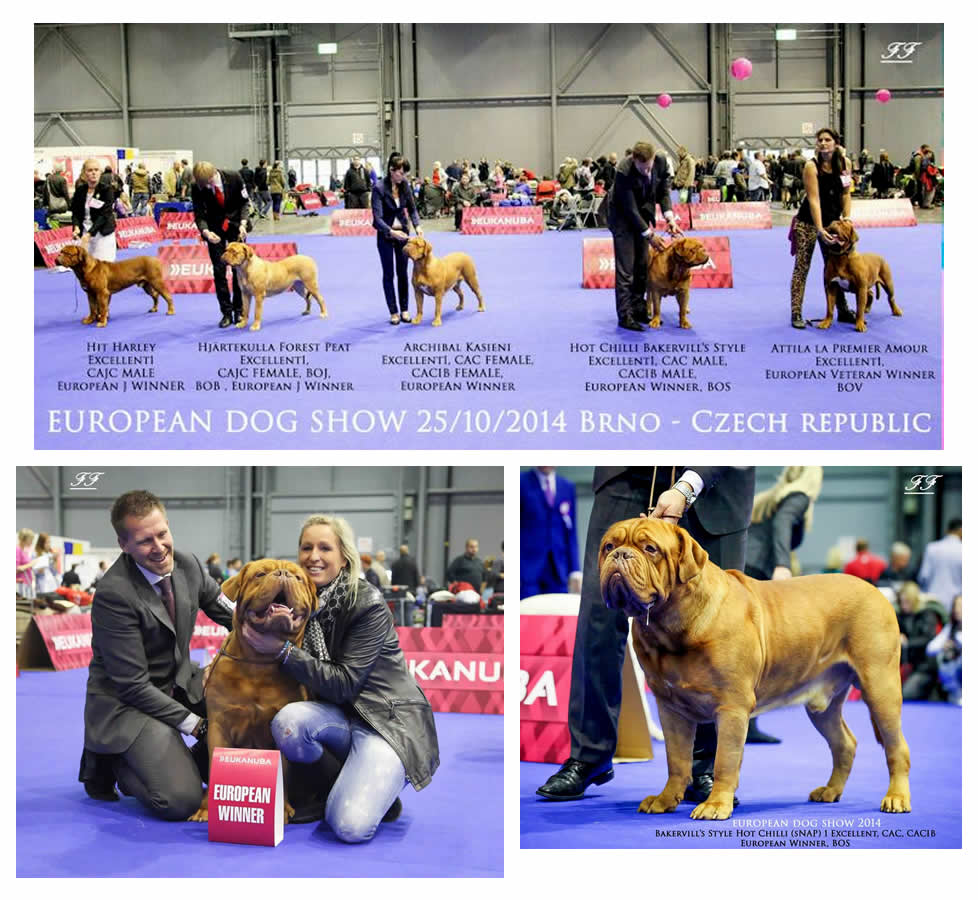 A long travel and another super showweekend was the result. Not only we had the honor of driving back home with Snap, an EUROPEAN CHAMPION now.
But besides this we had a lovely weekend with our friends from Holland, Ukraine, Italy  and Germany. 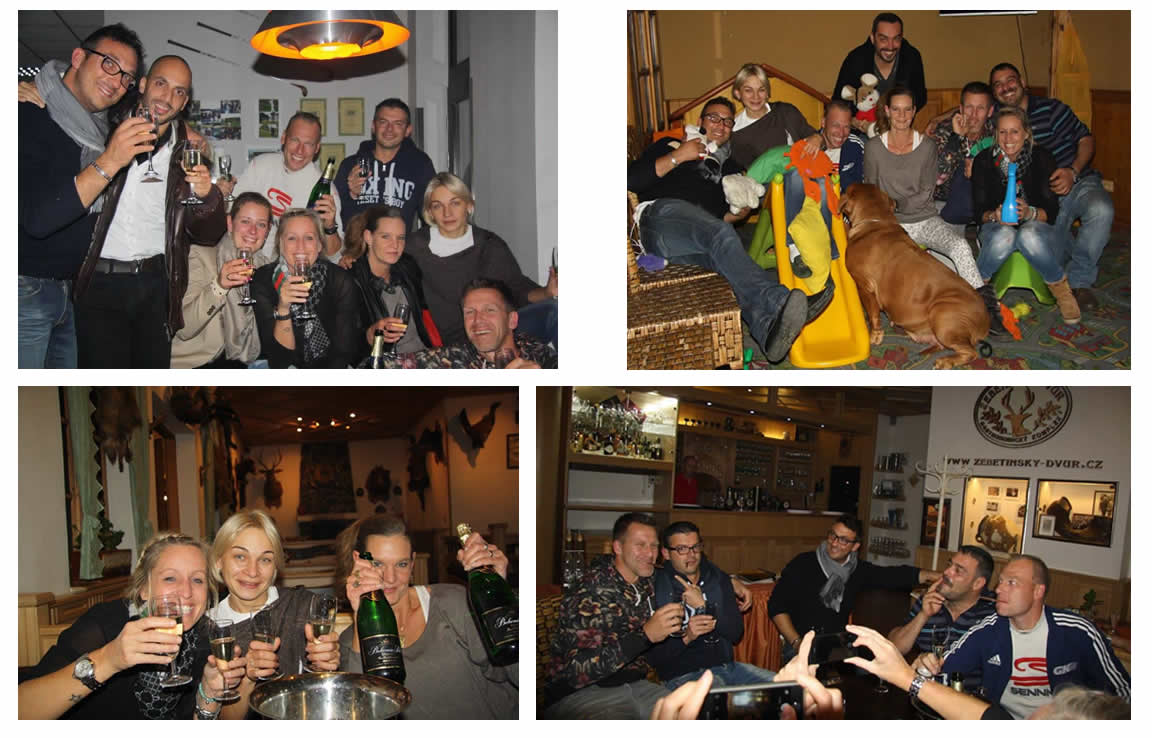 Of course all the honors go to the Champion, well about the human beings … I
think the pictures speaks for themselves. We enjoyed this great weekend with our friends very much! 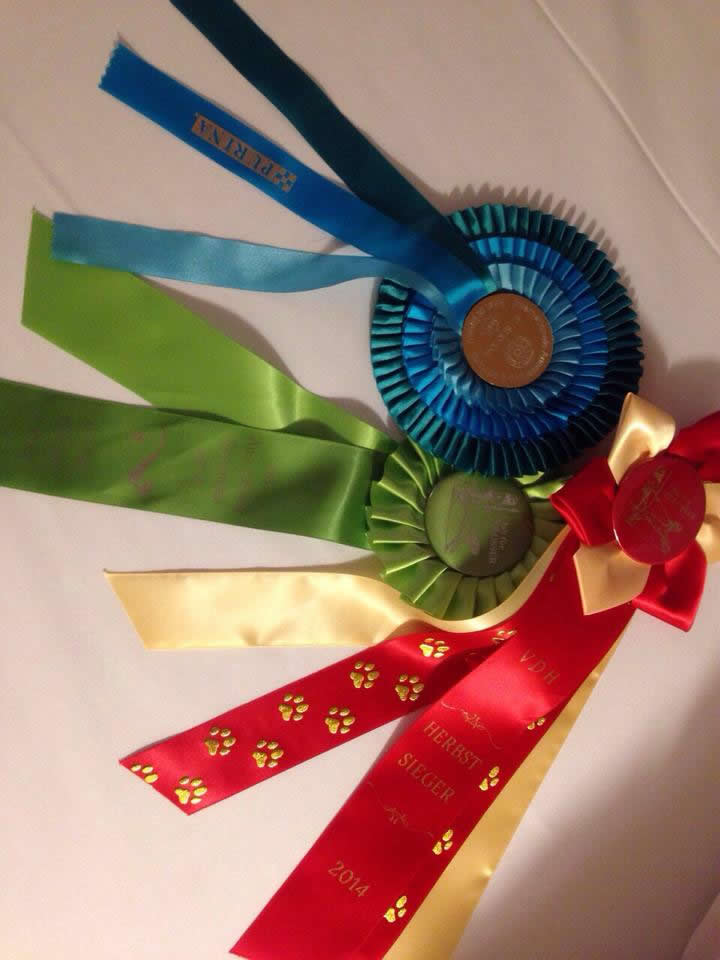 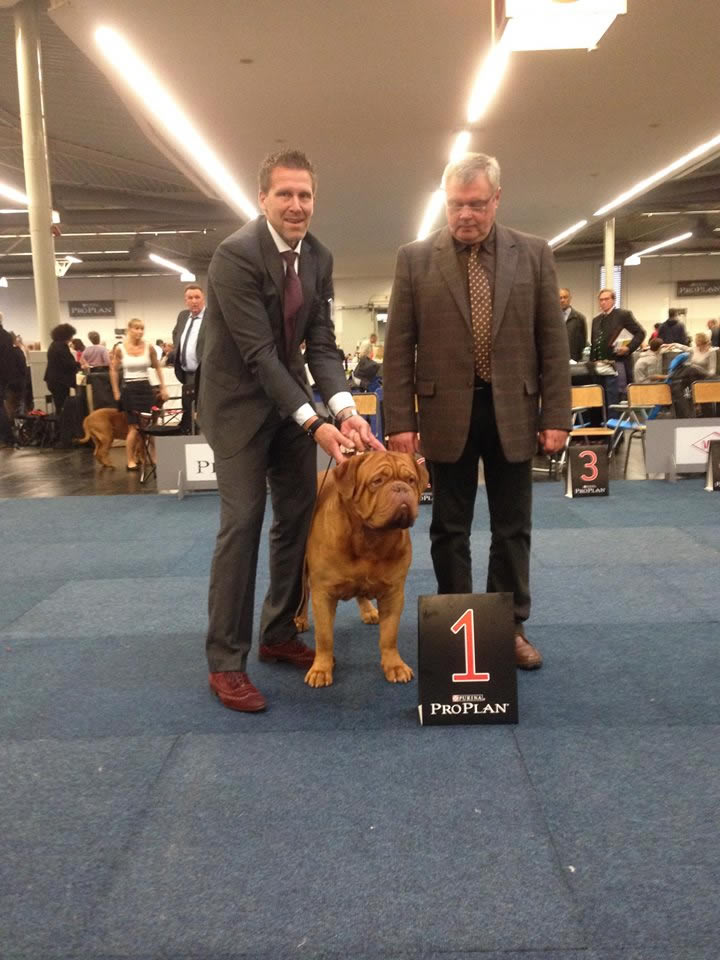 Bakervill’s Style Hot Chilli -Snap- : Best Male – Best of Breed – BundesSieger 2014, next to this fantastic result, some of the Toto-Offspring did a fantastic job, with Best Young Dog and Best Female!! They where judged by Mr. Vicenzo Parmiciano from Italy. Two days earlier on the National Dortmund Show Snap was judged by Mr. Jurgen Sauer SNAP became Best of Breed also with a fantastic critique.
♥Just so proud ♥ 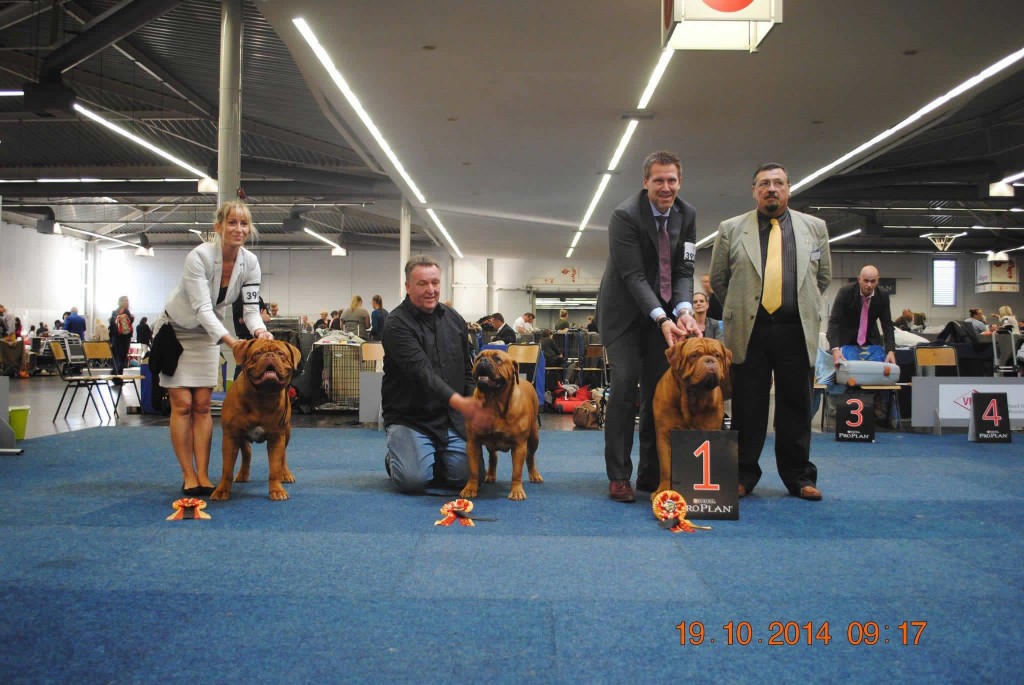 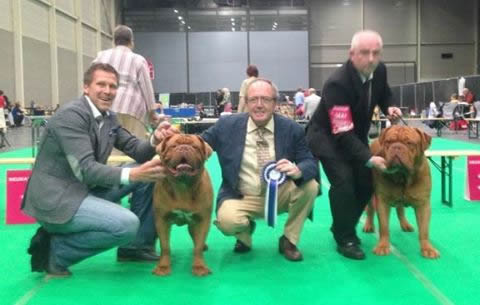 Brother and sister take the Dutch Championship in style after winning BEST MALE and BEST FEMALE today on the International Show in Maastricht (NL) Bakervill’s Style Hot Chilli -Snap- became Best Male  and his sister Bakervill’s Style Honkey Tonk Woman -Pipo- became Best Female and Best of Breed and was with the last 7 in the ring of honor. This under Judge Mr. Rafael Malo Alcrudo from Spain.
Thanks Stephen Colman for helping us out for  Best of Breed with Snap, it was nice to meet you both again! 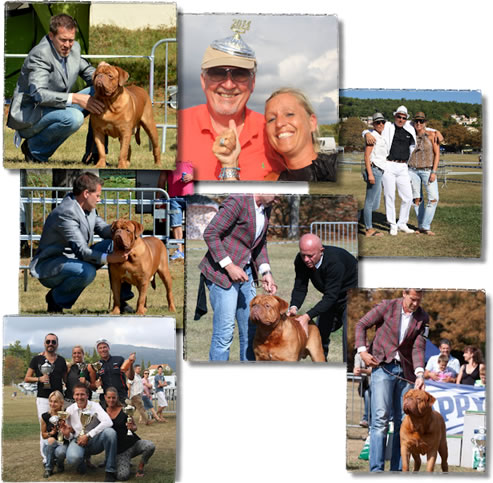 We  had a wonderful weekend in France with our good friends from Holland Rick & Sabrina and Irina and her husband & Vitaly.

We real enjoyed our time together.

Our pretty young boy Back to Basic from Lakki House -Pummel- became BEST JUNIOR DOG in SHOW.
Thank you to the breeder Irina Lapatina to have this wonderful boy around 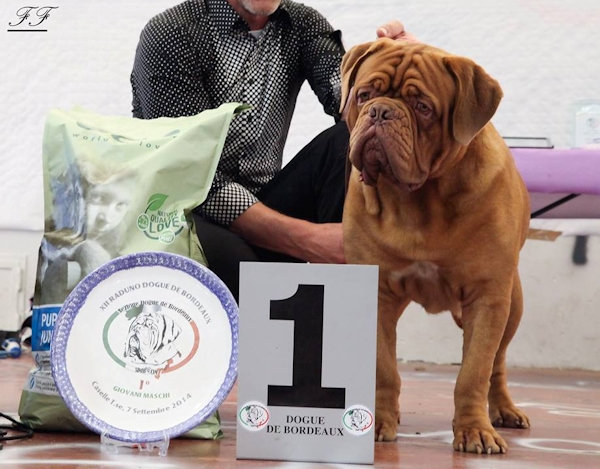 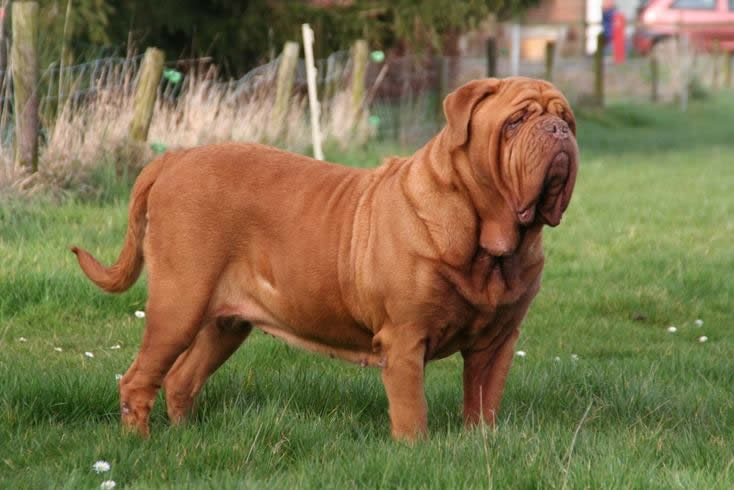 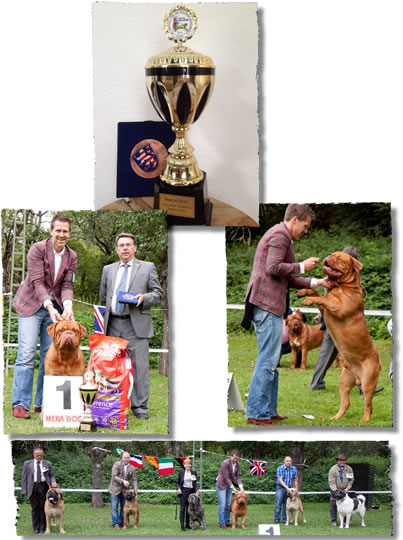 Yesterday we went to the Clubmatch from the Club für Molosser e.V. in Germany. We arrived on the Saturday evening and had a nice BBQ with some great people at the showground.

After a few ours of sleep  “Showtime”. We had some excellent results with our 2 boys…………….
Bakervill’s Style Funky Boy -Toto-winning Champions Class Males and  Bakervill’s Style Hot Chilli -Snap- became first in Open Class Males. Both had to compete for the Best Male of the day. In that final Toto became RESERVE BEST MALE and Snap became BEST MALE,  BEST OF BREED.
Finally for all molosserbreeds the Best in Show competition with high quality dogs. Snap did a fantastic job and became – !!!!
….. BEST IN SHOW ….. !!!!
Thank you Mr. Jesús Sánchez Pardo – Spain and the commité of the Molosser Club for the great organisation and the excellent food 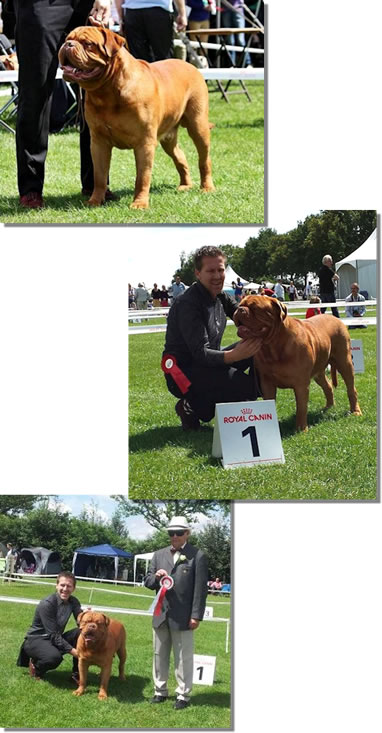 and finally to top it all Snap placed 4th in Group 2 amongst very very nice dogs.

We want to thank the judges Mr. Sinko from Slovenia for making him BEST OF BREED

and Mr. Doedijns from the Netherlands for placing him in the Group.

June 10th
We entered our youngster & our big Boy on the Show in Arnhem (NL) this day. Our youngster Back to Basic from Lakki House -Pummel-  who received a first placement in Junior Class, which made him DUTCH JUNIOR CHAMPION &  he became RESERVE BEST MALE and this at the age of only 11 months old. Later on our big boy Bakervill’s Style Hot Chilli -Snap- became BEST MALE & BEST OF BREED and 2nd in Group 2.
Snap is now officially qualified for the prestigious “Dog of the Year Show” in the beginning of 2015. We appreciate the judgement of Mr. Drs. Hildeward Hoenderken and thank him for some fantastic critiques about our dogs and of course a big thanx to Mr. Igor Selimovic from Croatia, the judge who placed Snap 2nd BEST IN GROUP 2.
And as usual a big thanx for the support of our good friends….. !!

May 25th
Happy, Happy, Happy, Happy @ home after a nice day of showing on the International Dogshow in Hulten (NL).
We only entered our youngster Back to Basic from Lakki House “Pummel” to the show today. 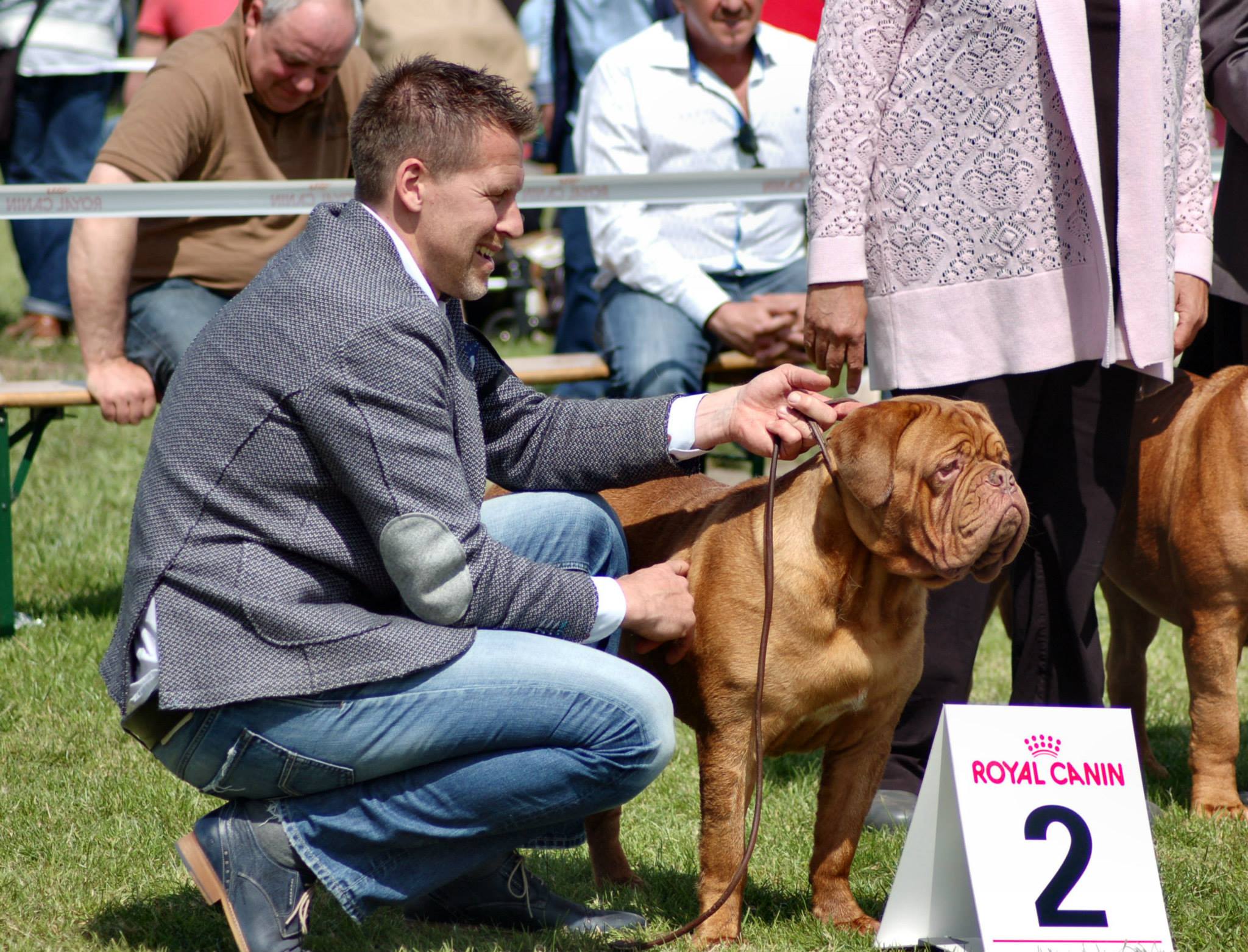 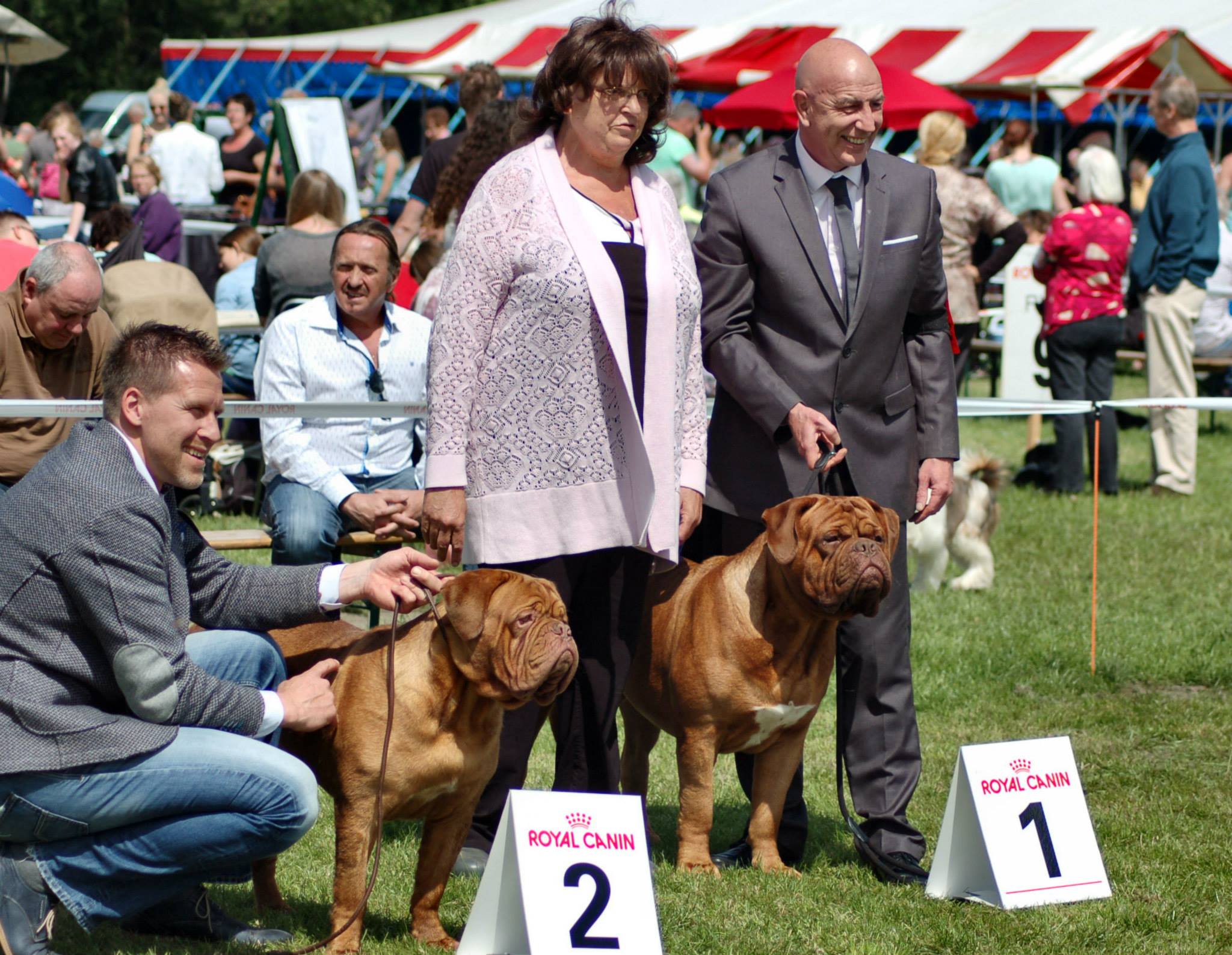 He did again a fantastic job……….
became first in the Junior Class and became Reserve Best Male at the age of only 11 months old.
A big congrats to the proud breeder Irina Lapatina and thank you to the Judge of today Annette Wijnsouw – NL.

May 4th
We  had a fantastic day, great weather and some excellent results on the Young Dog Day of the Dutch Dogue de Bordeaux Club. First we had to go in the ring with our youngest boy; Back to Basic from Lakki House -Pummel- at the age of just 10 months he won his class (10 till 14 months).
Our Bakervill’s Style Hot Chilli “Snap” had to show in the oldest class 18-24 months and won this class, became BEST MALE and BEST IN SHOW out of almost 100 Dogue de Bordeaux. We are really happy with these 2 youngsters, they did both great in the showring. 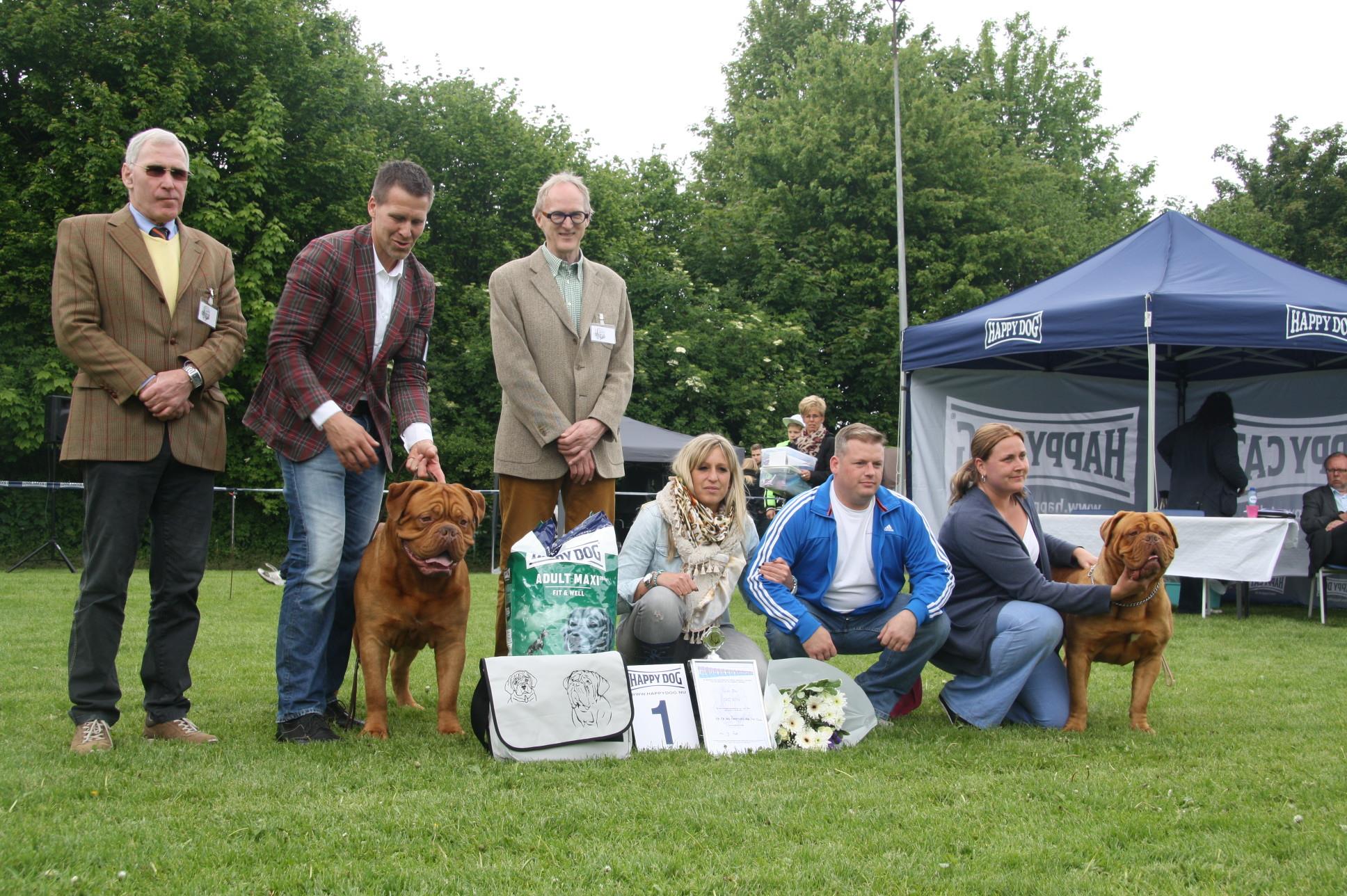 A special thanks to the judge of the males Jan Liet for thinking so highly of our youngsters. 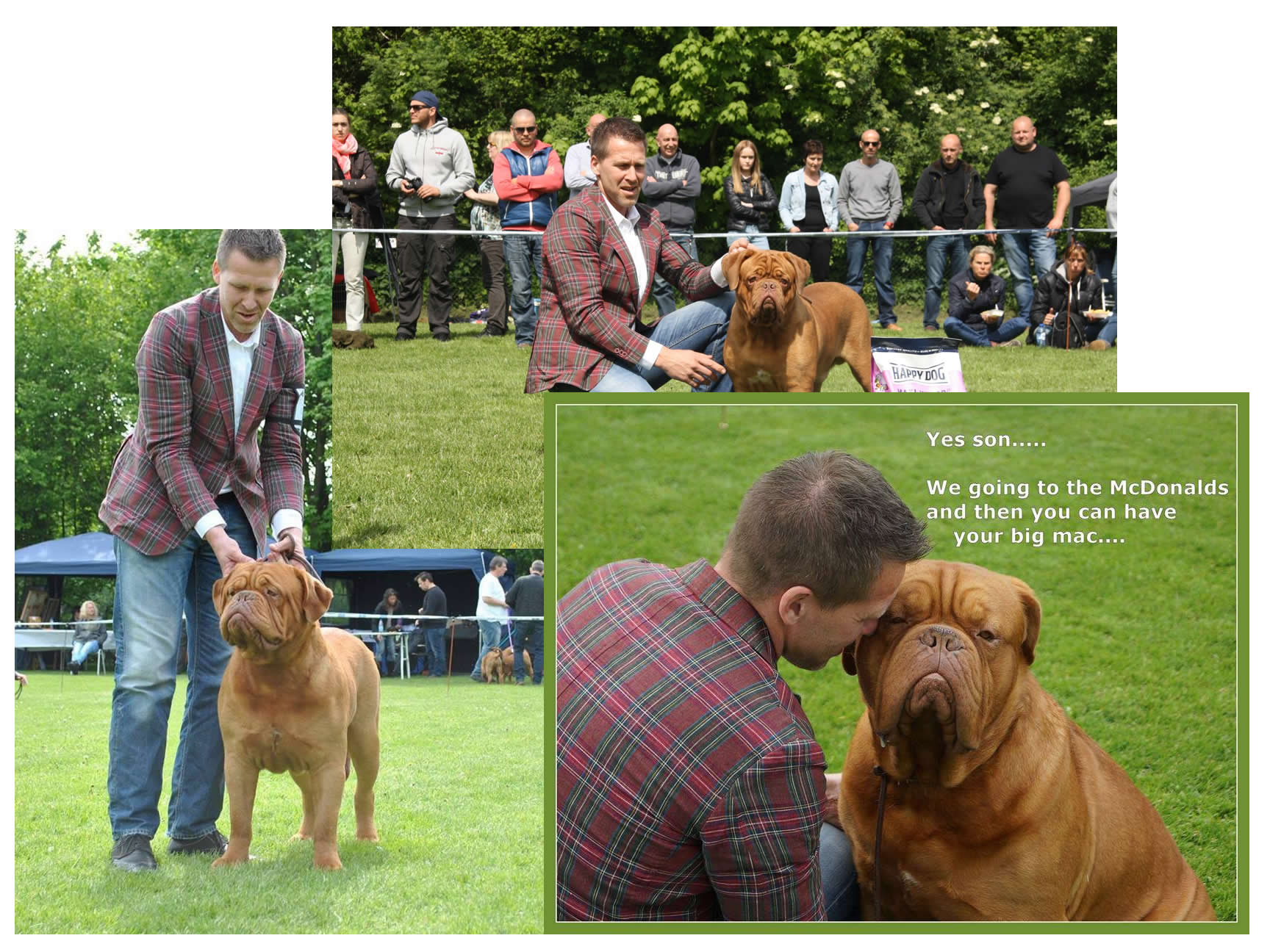 Also we thank Dick Baars together with Jan Liet for making “Snap” Best in Show on the Young Dog Day.

And of course  thank all our lovely friends for the nice company last weekend……..

Very proud home after a showday on the International Dogshow in Utrecht – NL.
Yesterday we only showed with our youngster Back to Basic from Lakki House “Pummel” (just 9 months old) and got a fantastic result he got his first Youth CAC point. Judged by Mr. P. Roosenboom – Belgium.
So you can also be very proud Irina Lapatina your boy did a fantastic job today..!! 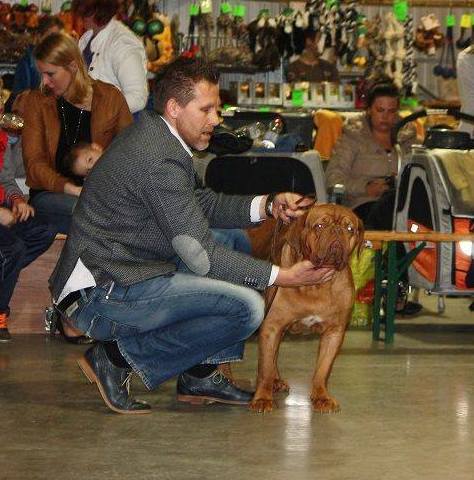 Thanks Marion Arnts for the picture!
March 6th 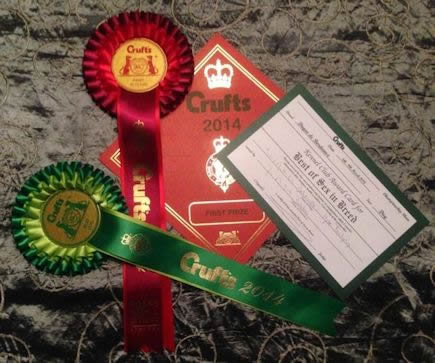 at the biggest and best organized Dogshow in the world “Crufts”.
Bakervill’s style Funky Boy “Toto” after last years Best of Breed, took Best of Sex in breed this year.
Our boy did again a fantastic job, he made history to win 2 times in a row on Crufts……. !!!
After the judging a camera-crew asked us if we had time to make a small promotion film
about high profile breeds in England together with an Old English Mastiff and a Mastino Napolitano.
The reporter asked us because she had seen us in the ring and to her Toto was a perfect example for the breed meaning: fit for function.
So a big compliment ….!!! We want to thank all the people and friends who supported us…!!!! It was nice seeing you all….!! Picture: Linda Hall 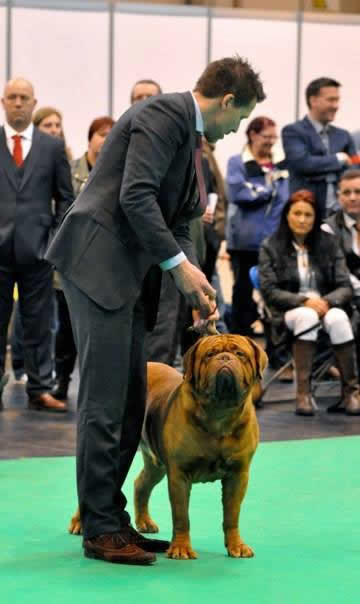 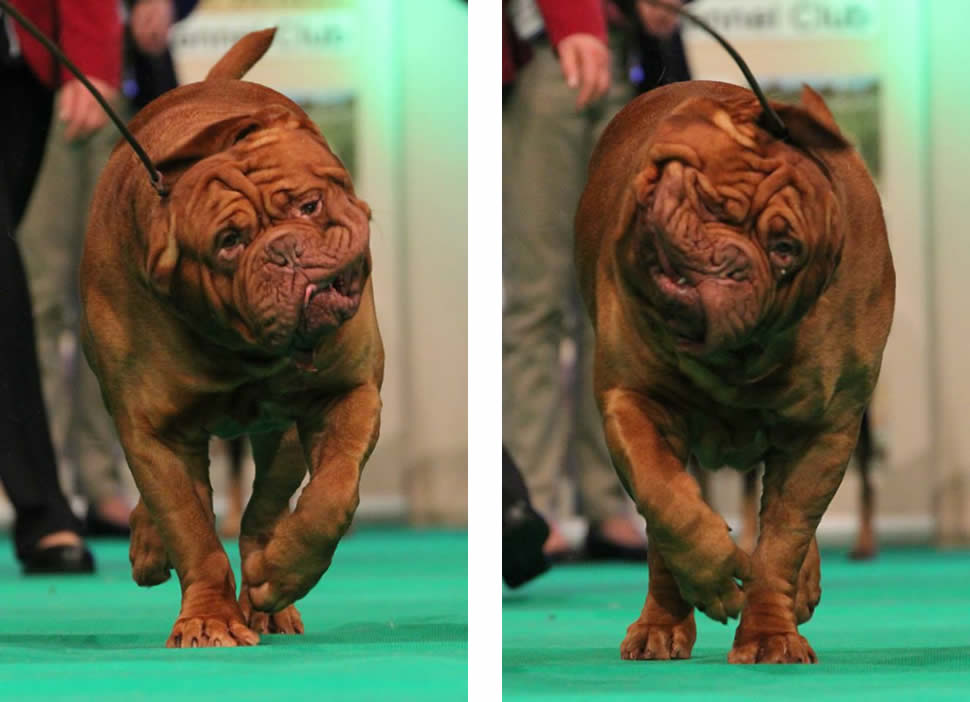 For the third year in a row our boy Bakervill’s Style Funky Boy “Toto” was invited on the catwalk,
he did a fantastic job again. He was shortlisted between the best 10 dogs!!
Every year Toto enjoyed to be there 🙂  our guess …. he thinks he is some kind of famous model 🙂

February Young Dogs Day Zaanstad (NL)
Today we went to the All Breed Young dog Day in Zaanstad – KCZY.  We went over with our youngsters to train and socialize.  All the dogs were separately judged by 4 different judges;  Yessica Sam Sim, Hans Stigt, Mark Wisman & Hildeward Hoenderken in 3 different age classes.
First in the youngest class was Bakervill’s Style Irresistible “Hilly”  and second her brother Bakervill’s Style Illuminati “Joe” at the age of only 5,5 months old. After that she had to compete with the other 2 age group Winners  and “Hilly” became BEST IN SHOW……..!!!! 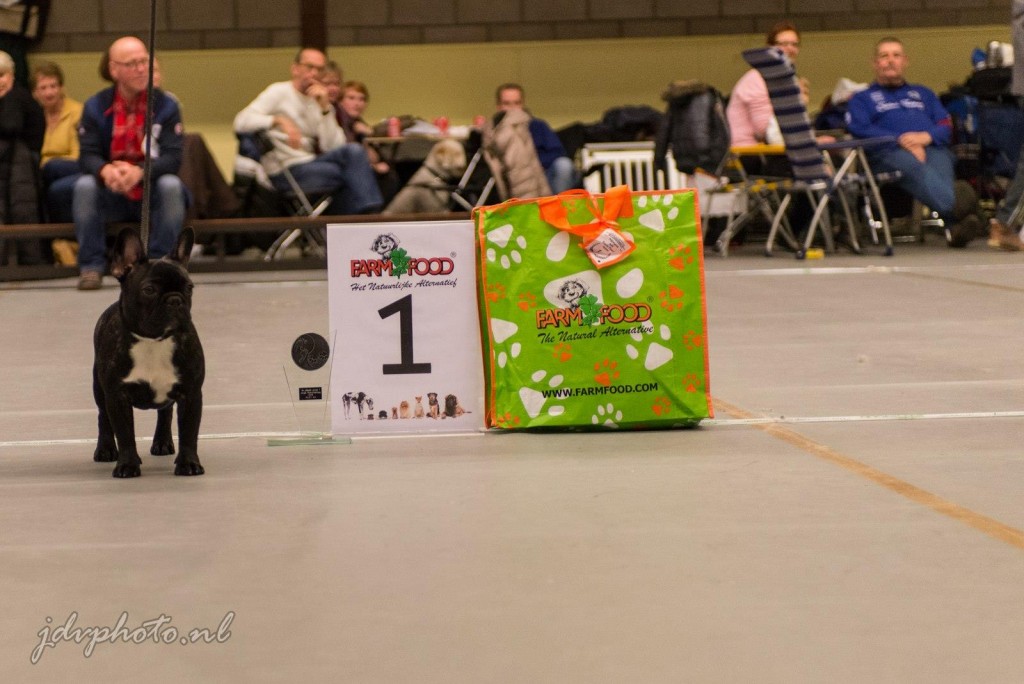 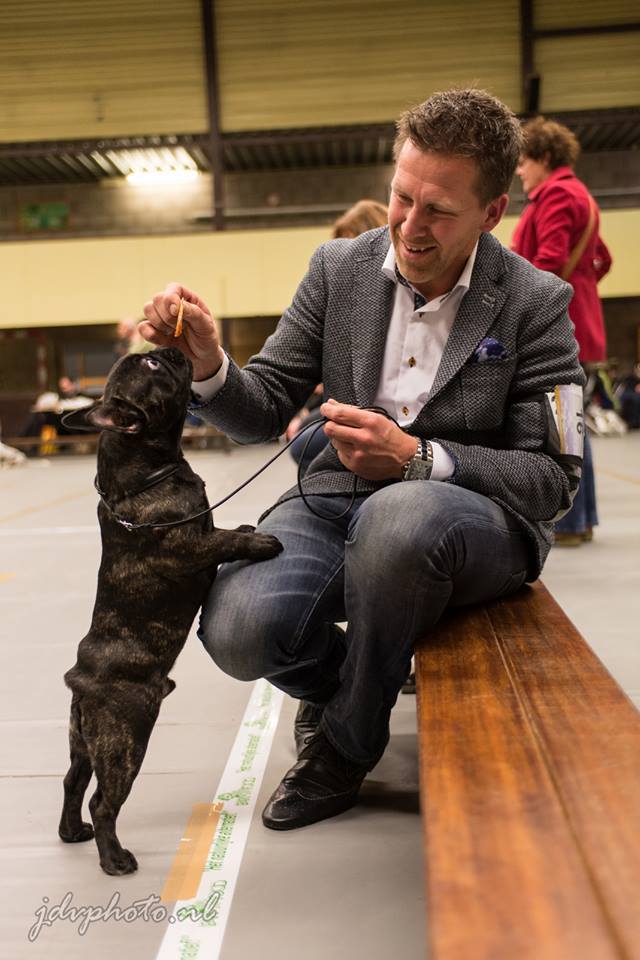 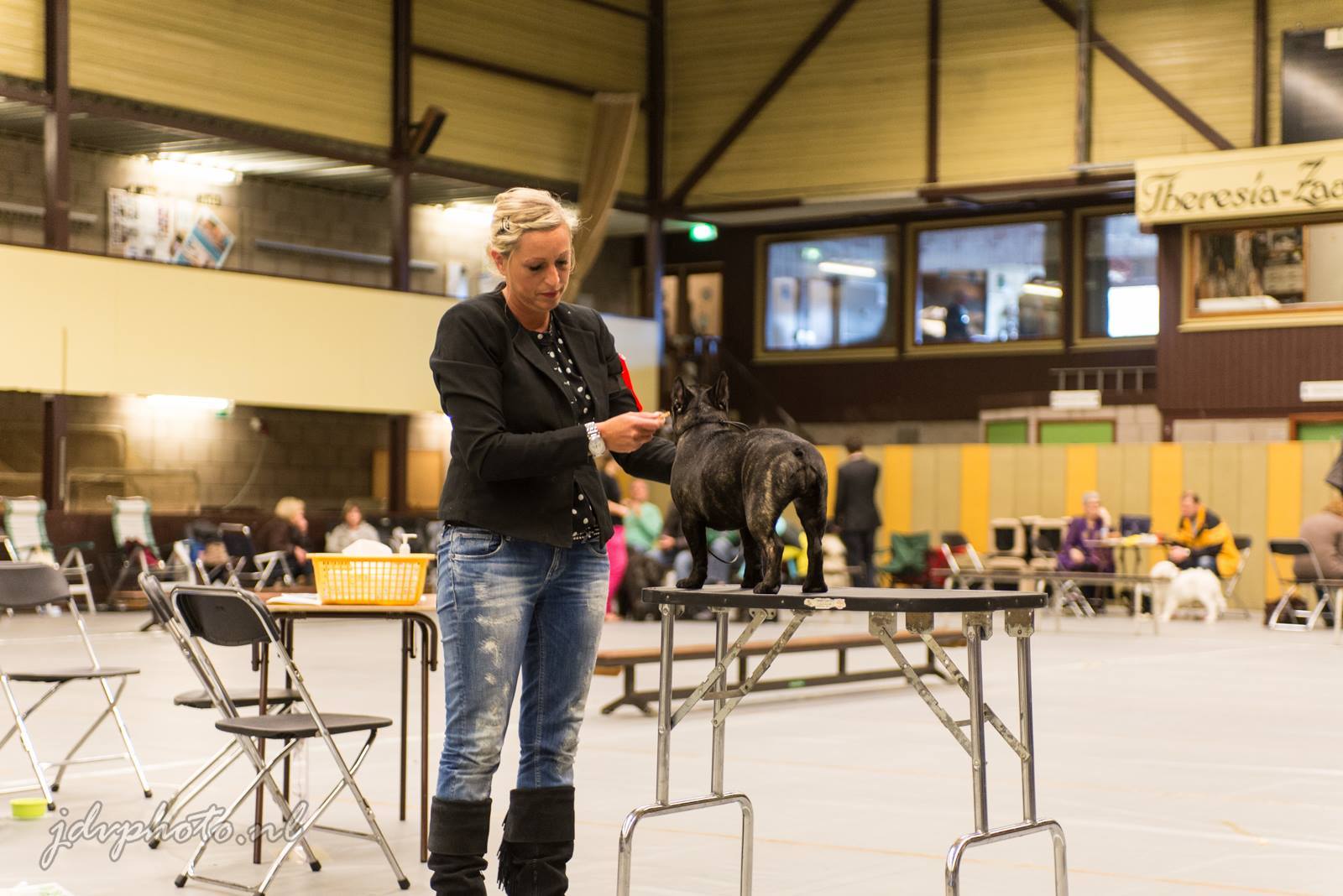 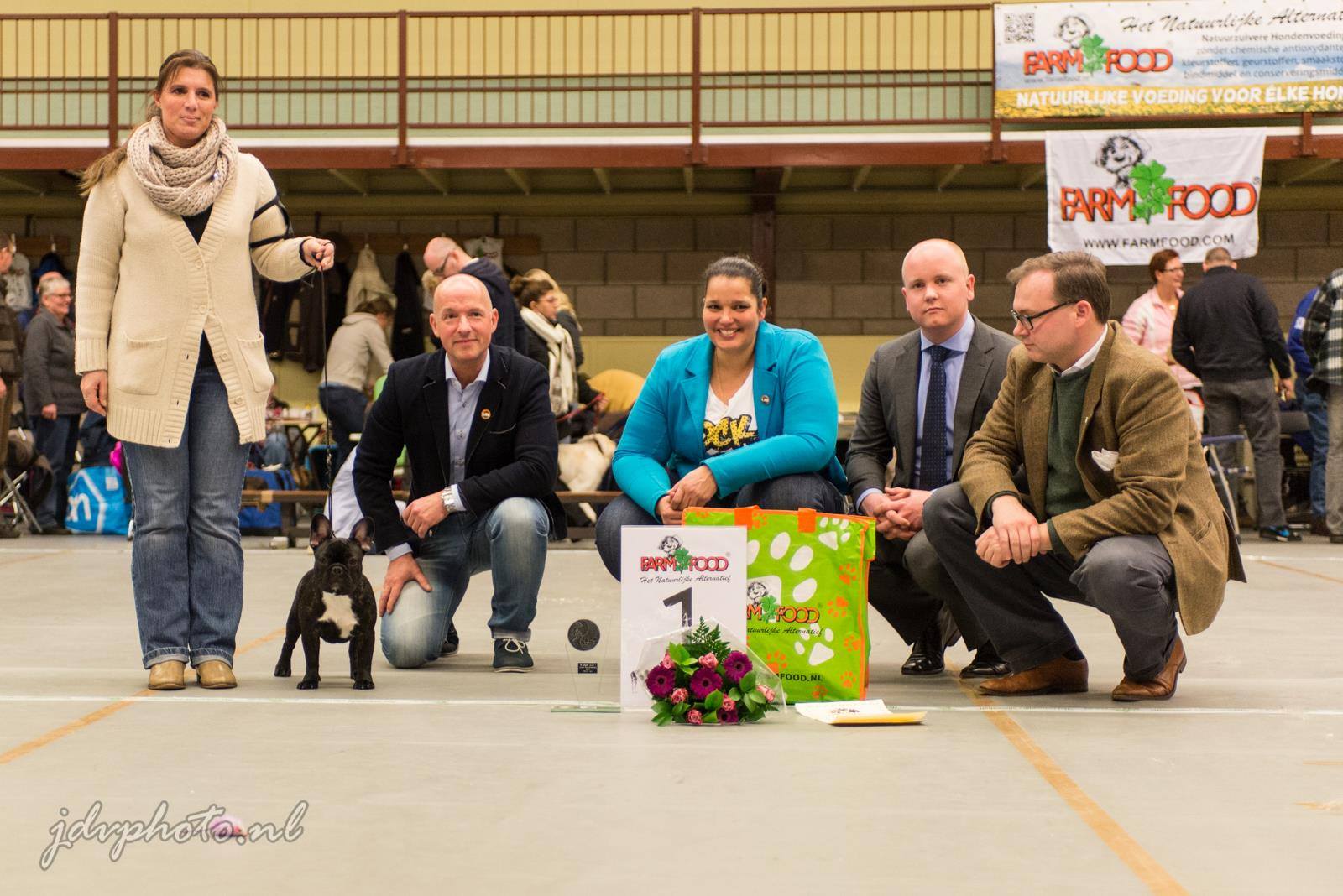 Thank to all the judges and all the people that were involved !!  And a big thank to Astrid Meesters for handling Hilly 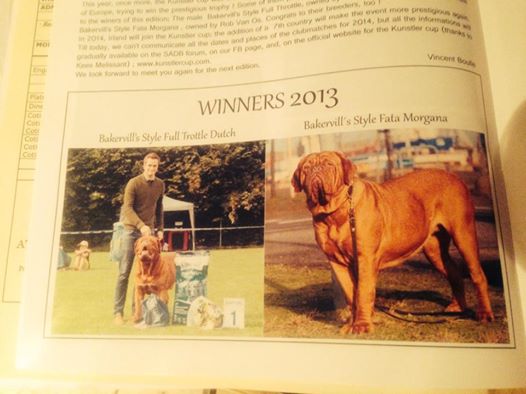