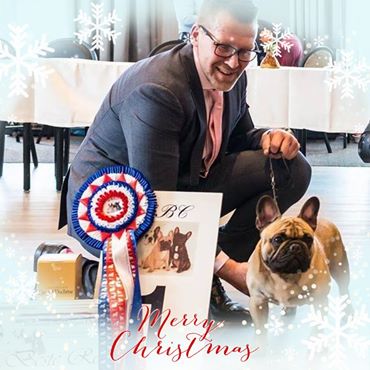 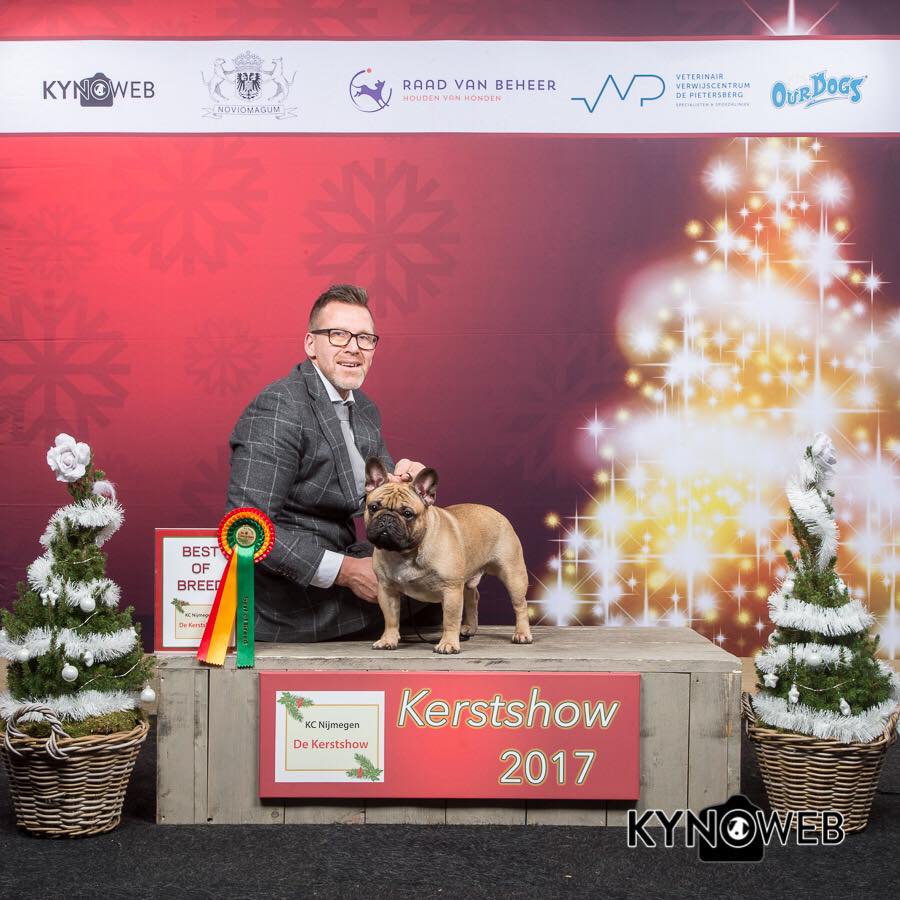 ♥MaSterClAsS♥
On his first International Dogshow our young boy Bakervill’s Style Masterclass ‘ Hannes’ did great 👍
becoming BEST MALE & BEST OF BREED under breedspecialist Mrs. Annette Wijnsouw (Nl). Thank you for your lovely words about our boy.
Thank youMichel Eppins for the nice picture and thank the people sharing the day with ust for this fantastic day we really enjoyed it!! 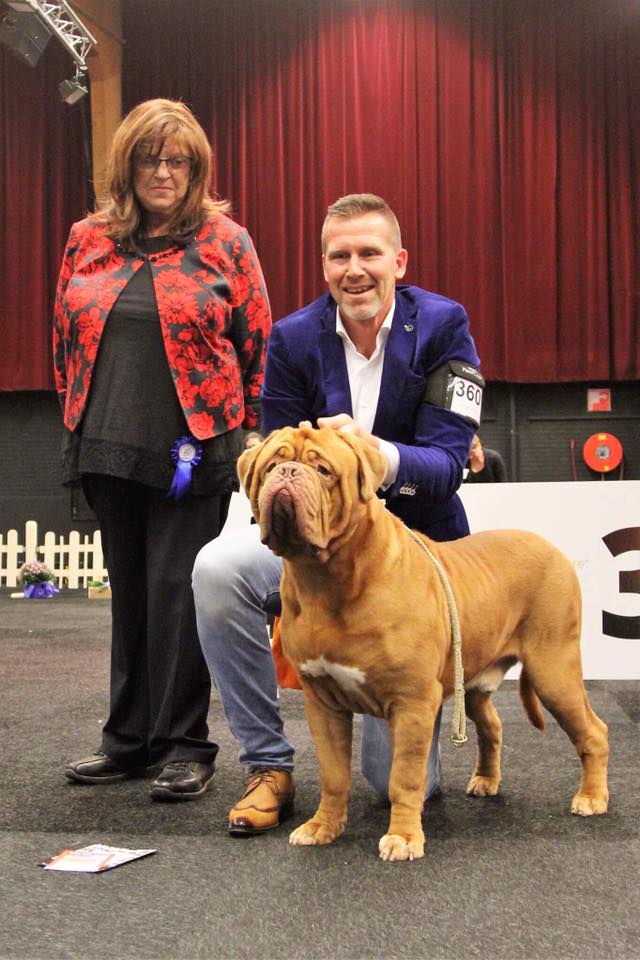 Over the Moon
This update we call ‘Over the Moon’,
because it is full moon and  ……
We just had a fabulous day today. at the International Dogshow in Zwolle (Nl)
❤️ Our young boy Bakervill’s Style Mad Max ‘Rolo’ became BEST MALE – BEST OF BREED and RESERVE BEST IN GROUP,
judged by  Group 9 specialist Mr. Pieter Burema – NL

After a rather nice Dutch Summer, Autumn is in the air. Finally -after several request of Bakervill’s- webmaster’s decision to finally update the website is more then welcome because we have nice news to share with the world!
At the International Dogshow Maastricht (Nl) we entered our Frenchie Bakervill’s Style Mad Max ‘Rolo’. First day of showing (Saturday) started with some excellent result for our Rolo, he was rewarded with BEST MALE – BEST OF BREED by Mrs B. Palasky (Ger). We are happy to tell this wasn’t all…… The cherry on top of the pie was his placement 3rd in Group 9 by judge E. Mander (Nl). One can imagine we are proud 🙂

*  note: Rolo in the Ring of Honor – available on our youtube chanel!! 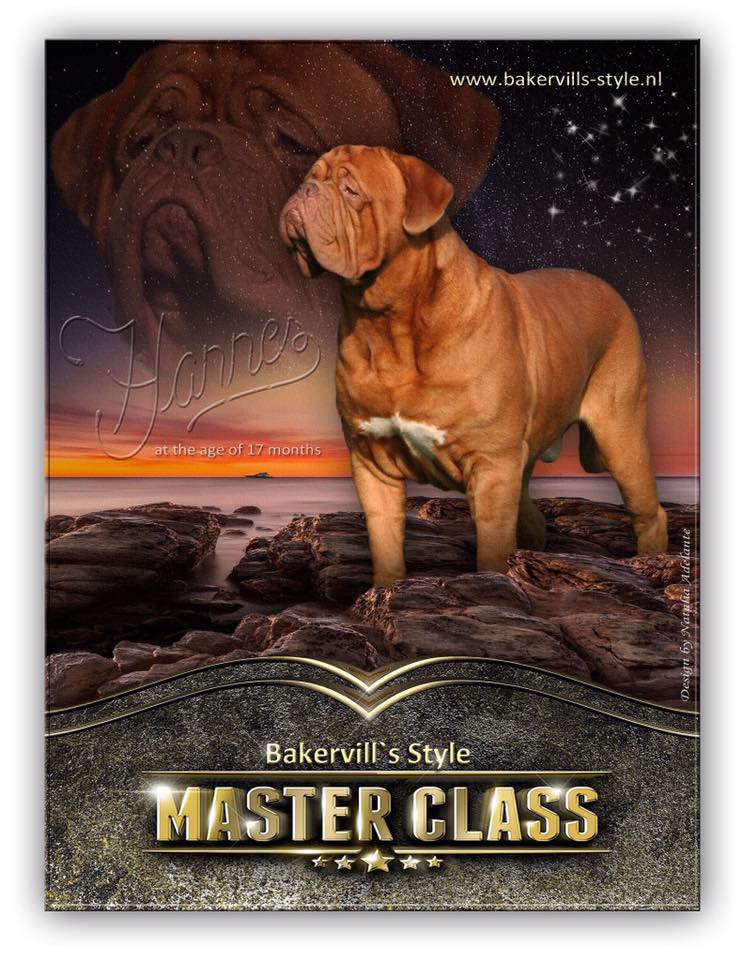 Some weeks later then usual we entered one of our most favorite shows …. the B.D.C.N. Dutch Clubmatch ….

We are happy to share that our young female Bakervill’s Style Mambo-Jambo ‘Mambo’ became  Winner in Breeders Class and at the end of the day was rewarded with Reserve Best Female! She is only 17 months old and the competition was hard.

We are happy to present an excellent picture of her (thanx to Jerry de Vries)! In our opinion (webbettiemaster agrees with this opinion 🙂 🙂  )  Mambo shows some very nice typical gaith in the pic 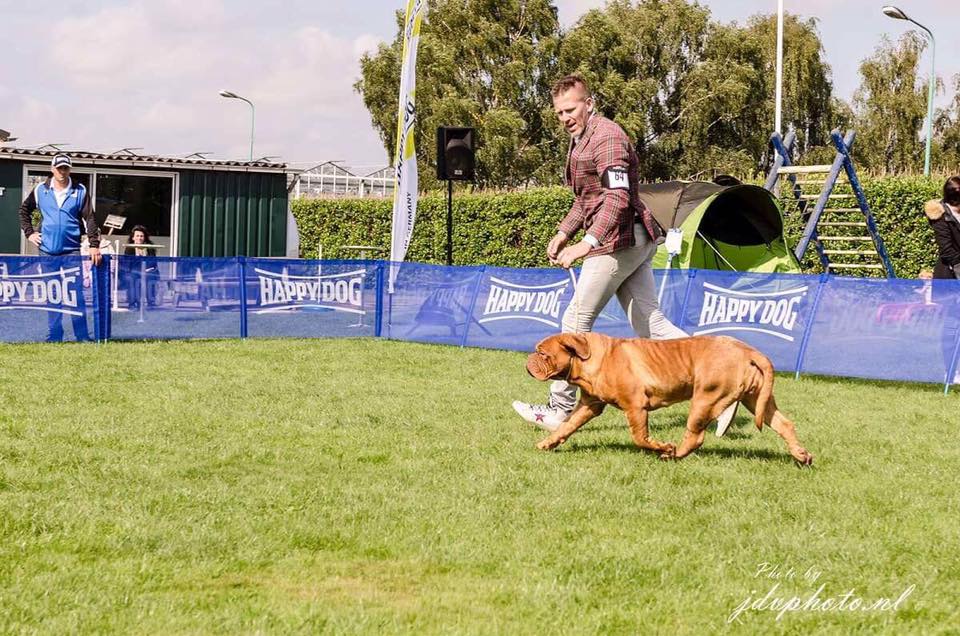 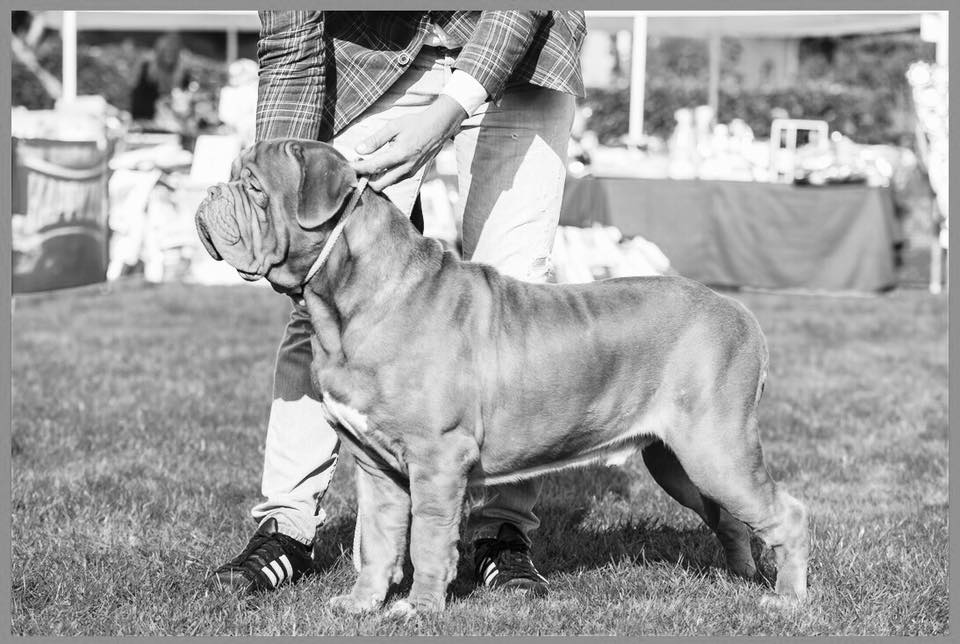 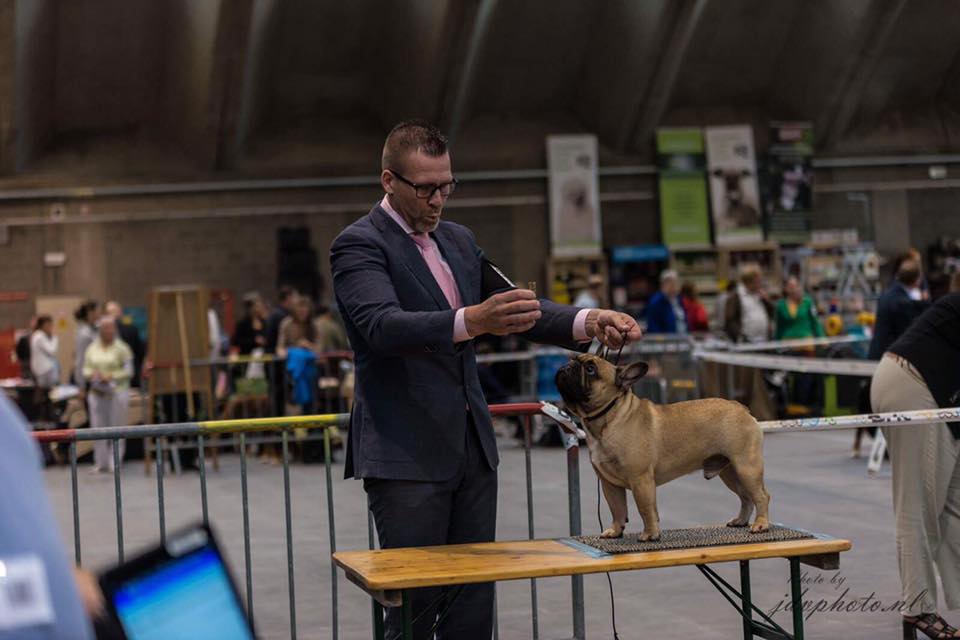 We want to thank the judges  Mr. H.O. Hoenderken and Mr. T. Havelka.

SummerTime At Bakervill’s
for our lovely ‘oldie’ 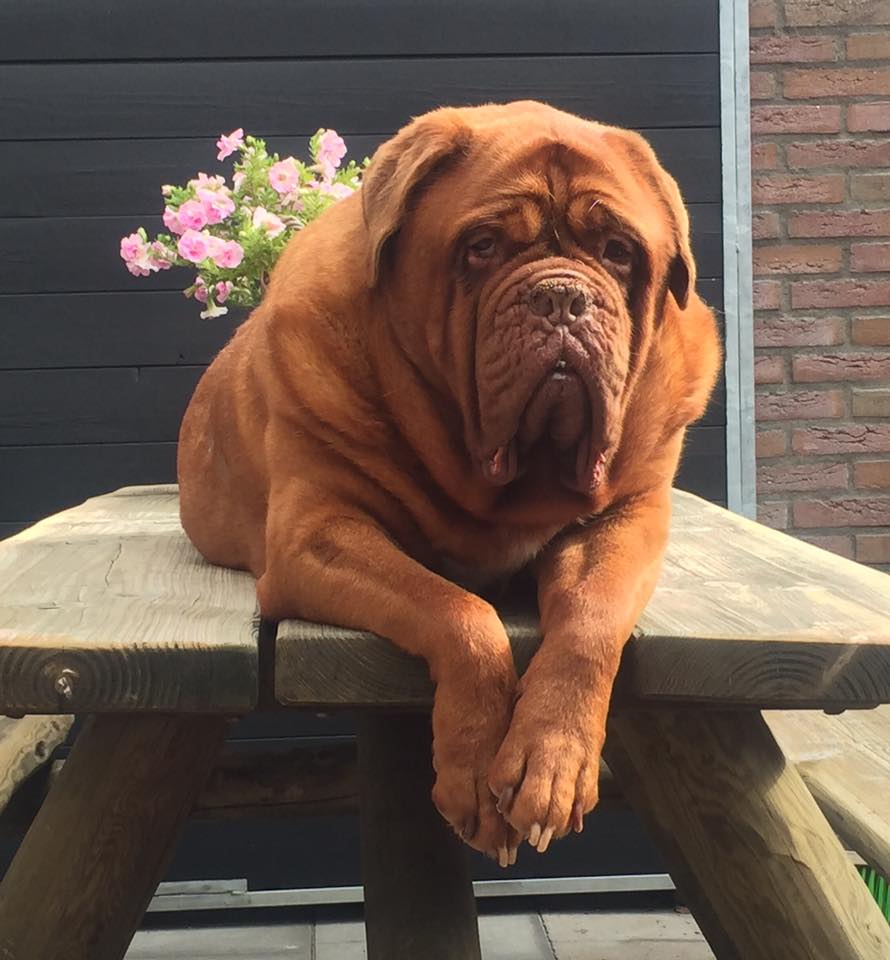 ❤️ Thanks to all people who made this showweekend so special 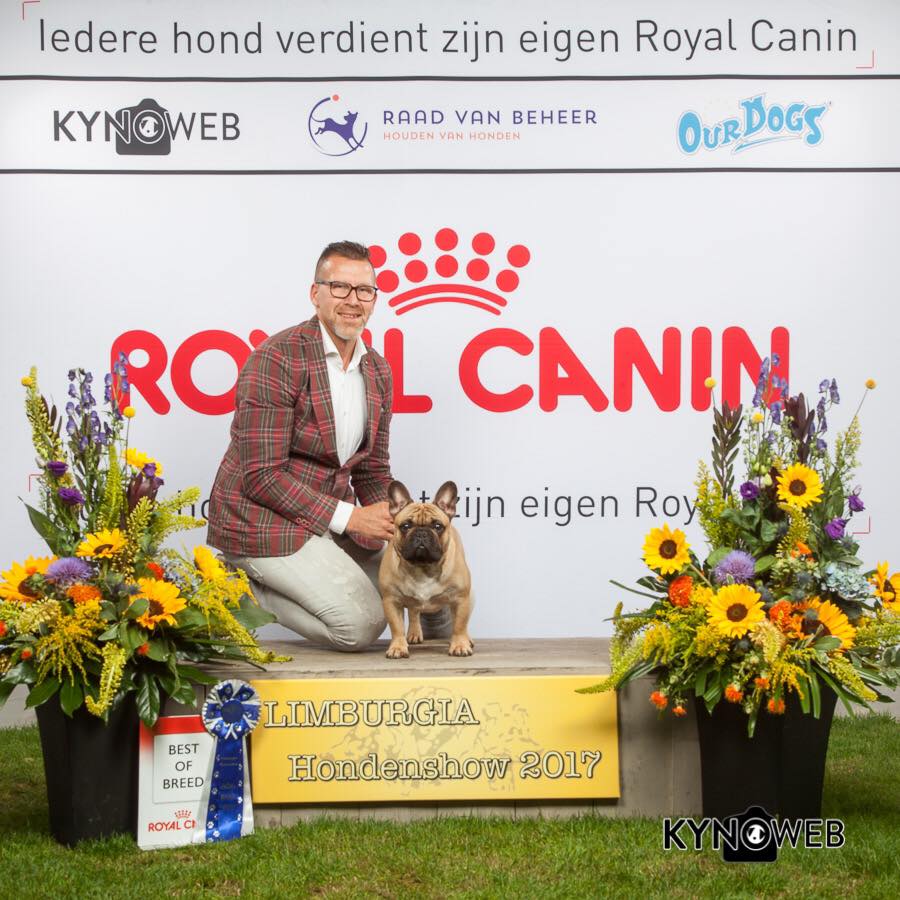 Europa Sieger 2017 – Germany
We are sorry we have no picture of this fabulous show, but well we share the results because we are sooooo ………………..
……………PROUD of………..
Our young lady Bakervill’s Style Mambo Jambo ‘Mambo’On the Europa Sieger in Germany Mambo became EUROPA JUNGEND SIEGERIN 2017 and took also BEST FEMALE, this out of Junior Class

and shortlisted in Group 9 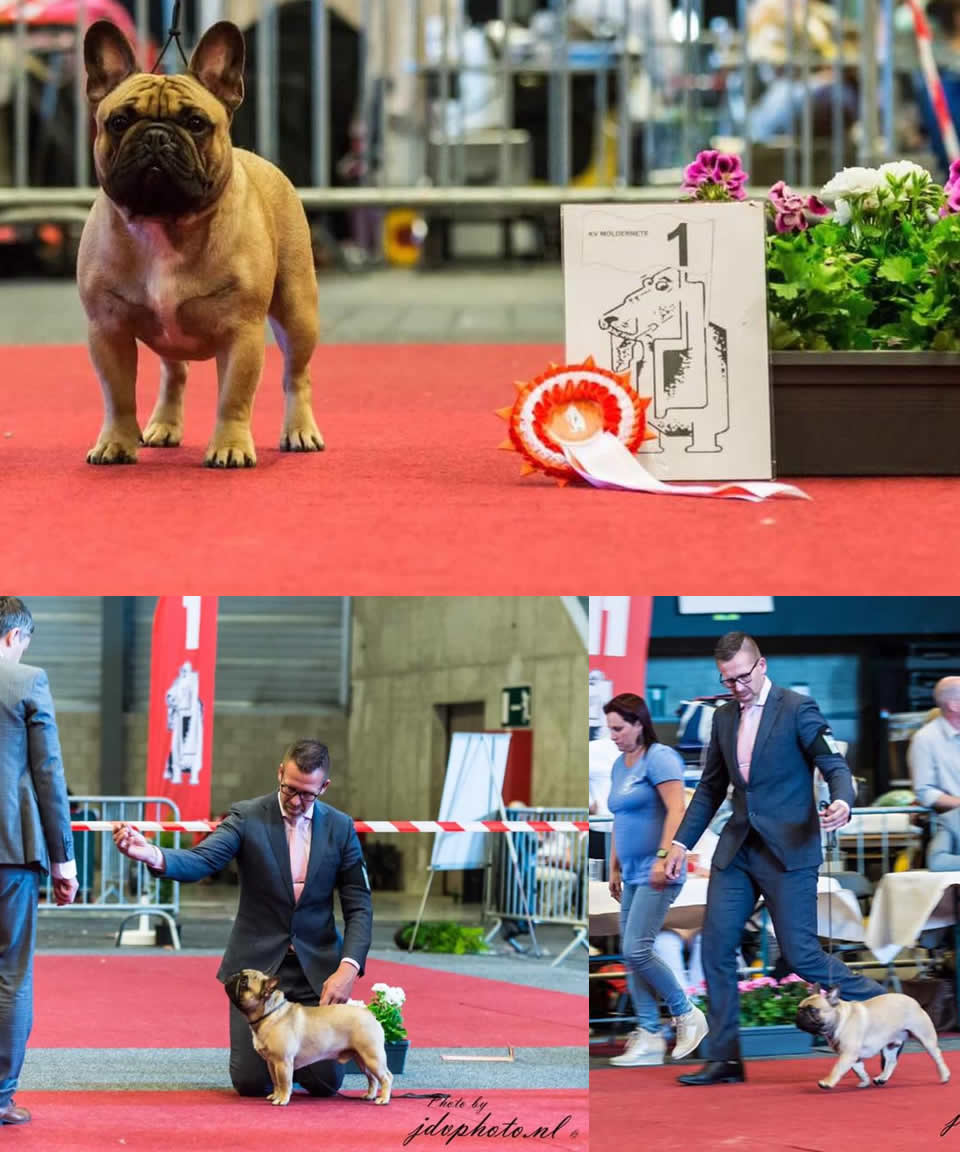 Judge Mr. J.L. Williams – NL
Thanks Jerry for the pictures 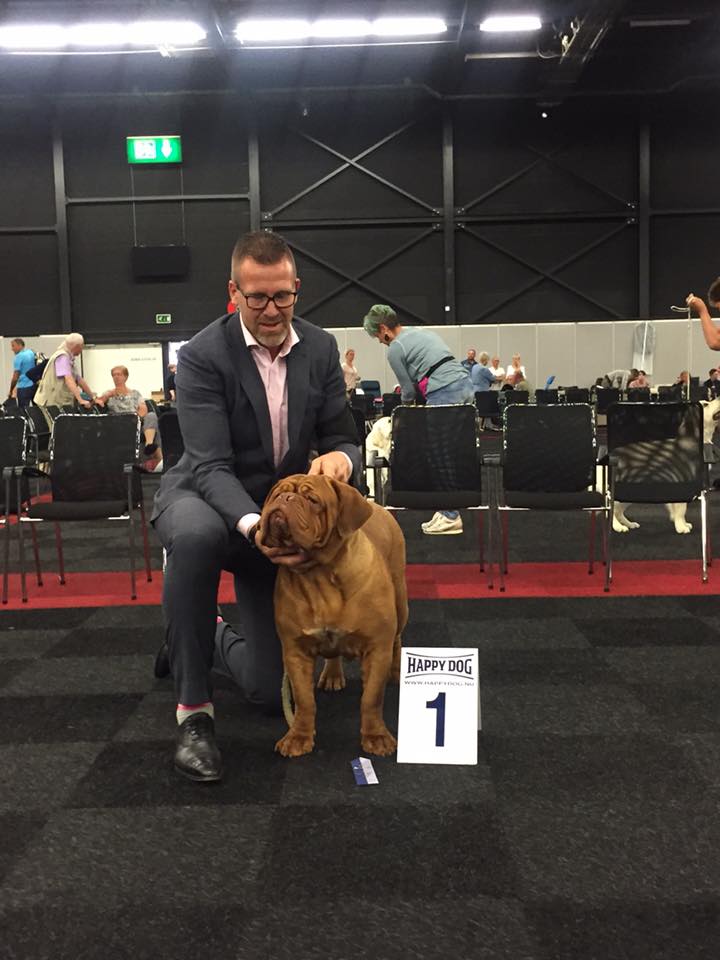 and looking forward to her showfuture

 Thanks to the Dogue de Bordeaux Lover/Judge Mrs. CarolCavanagh from the United Kingdom, . Congrats to All the other winners

and thanx for  the nice day

Best of Breed again…… out of Junior Class.
This happened  on the National Dogshow in Venray(Nl) under the well known judge Mr. P. Roosenboom (Be)
Happy Eastern Ofcourse
May – 26th
The Show must go on 🙂 at a very hot (30+ degrees) Dutch Show weekend … 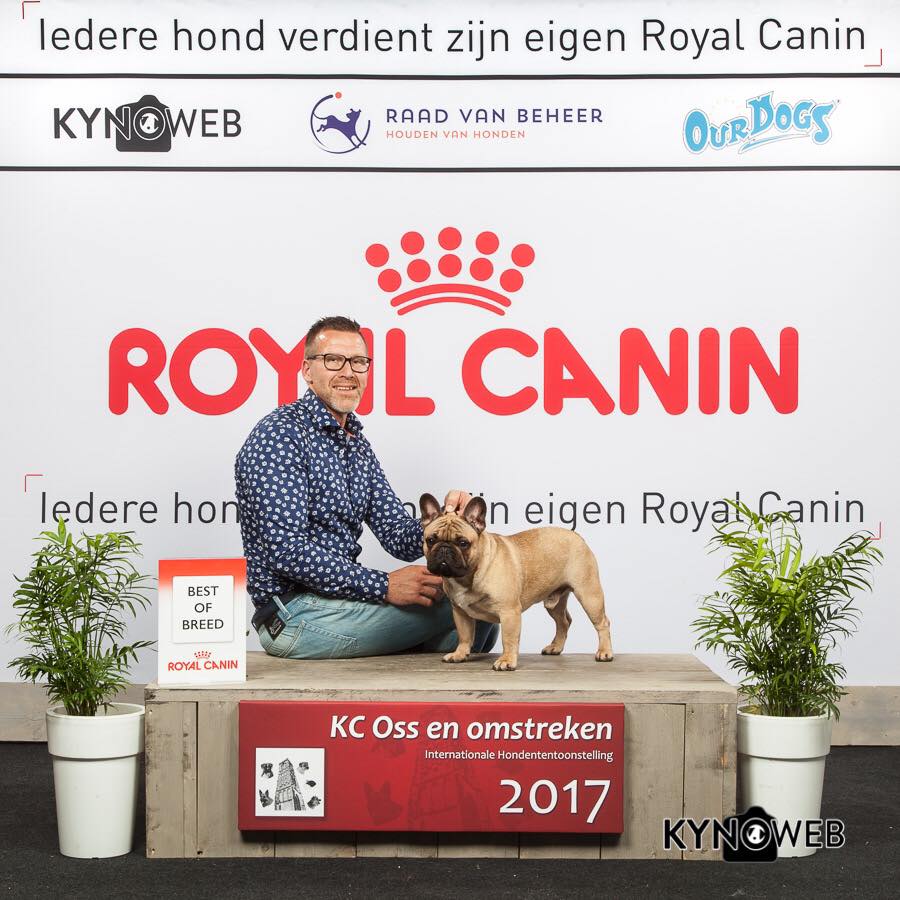 The 26th of may at the International Show in Oss (Nl) we went back home happy and proud again.
Bakervill’s Style Mad Max “Rolo” gained another  ❤️ BEST MALE and BEST OF BREED ❤️ 👍

Not that Bad 🙂 showing and ofcourse  ladie shopping 🙂

Reporting  about  the VDH-Europasieger in Dortmund…. Our young girl Bakervill’s Style Mambo Jambo ‘Mambo’ became BEST JUNIOR FEMALE – BEST JUNIOR and to top it all she became BEST FEMALE and got the titel – EUROPA JUGENDSIEGERIN 2017 👍 This is also an official Crufts Qualification 💕 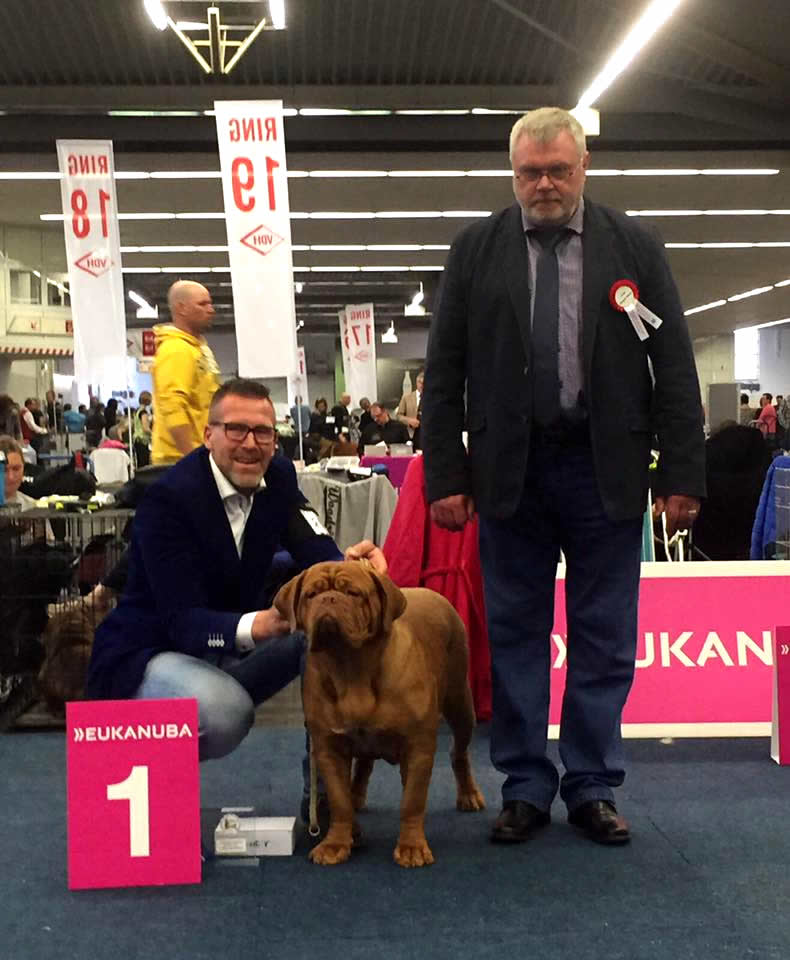 Judged by Molosser specialist Mr. J. Sauer from Germany.
We want to thank all for the fantastic day ❤️ Cheers

Today we had a fantastic day on the Young Dog Day from the Dutch Dogue de Bordeaux Club in the Netherlands.
By the way, this is the first year the B.D.C.N. decided to invite senior dogues also to appear in the ring and we enjoyed seeing them. We hope the club continues the senior class on this event too. 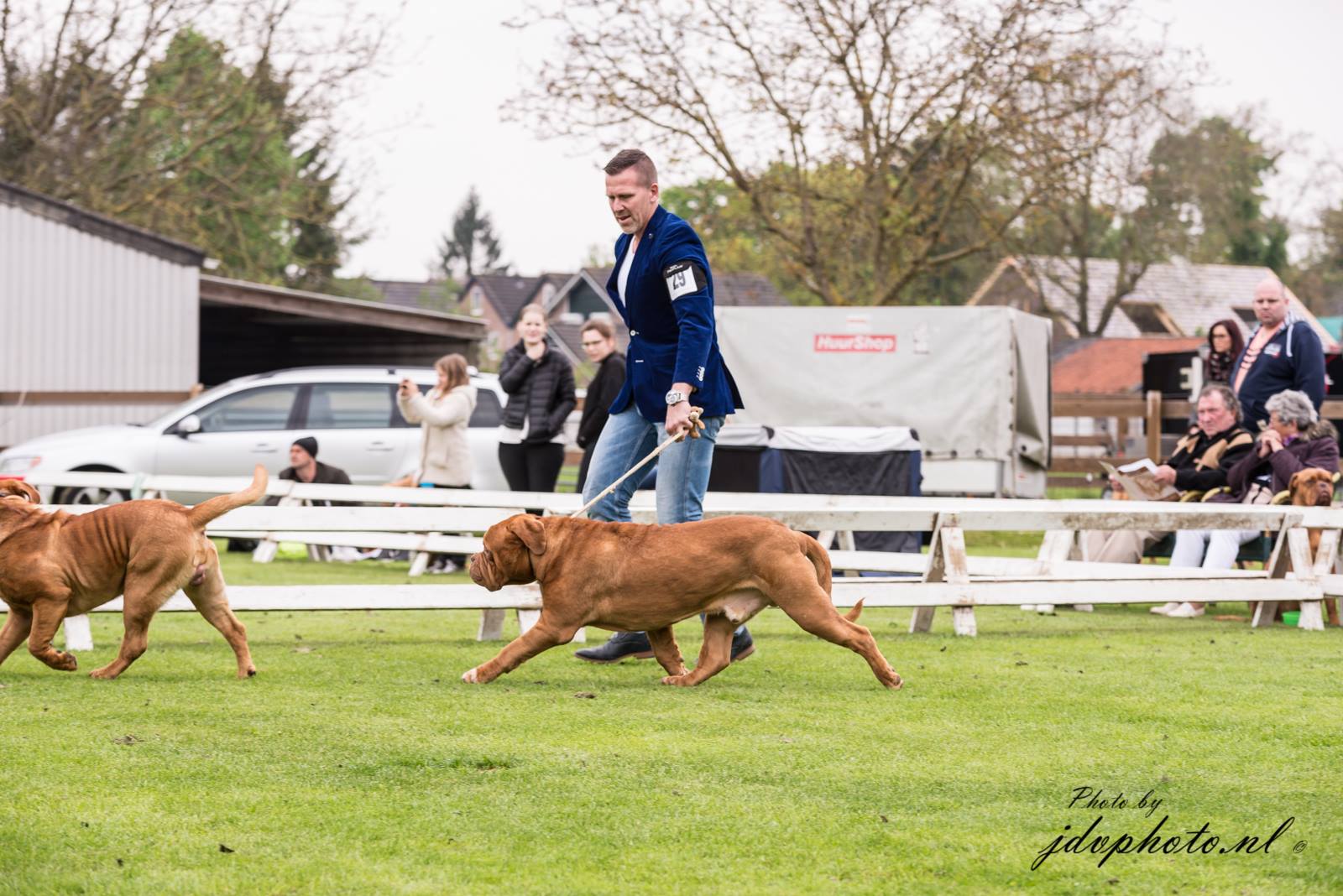 We only took our young male today – Bakervill’s Style Masterclass “Hannes”. He did great on his first show in junior. 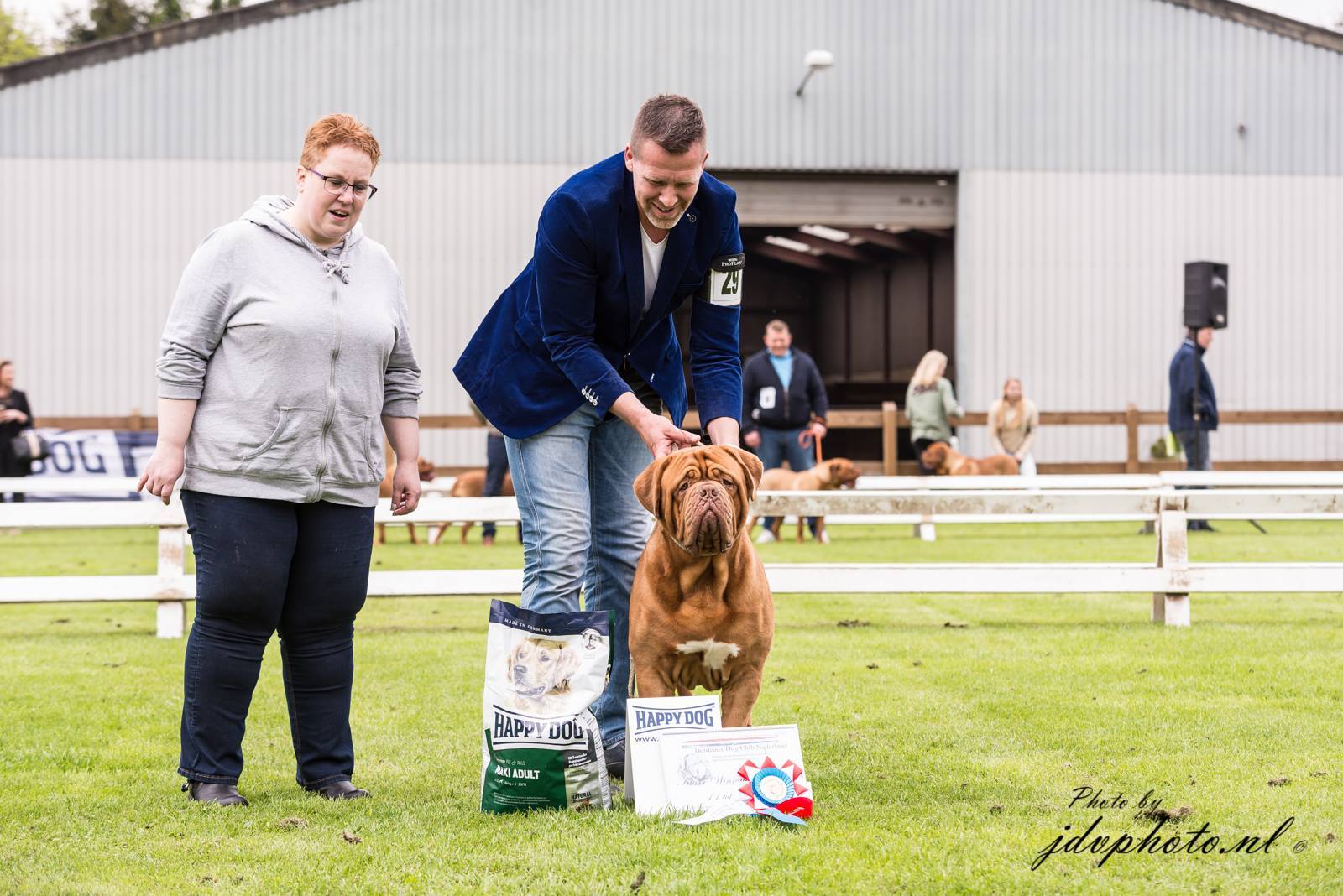 He won his class 11-14 months old. Congrats to all the other winners

“MEMORABLE” that is the only word that comes to our mind <3 ……….
Bakervill’s Style Mad Max “Rolo” taking BEST MALE on the this wonderful event at the age of only 14 months old.
He also took BEST DUTCH BRED DOG <3 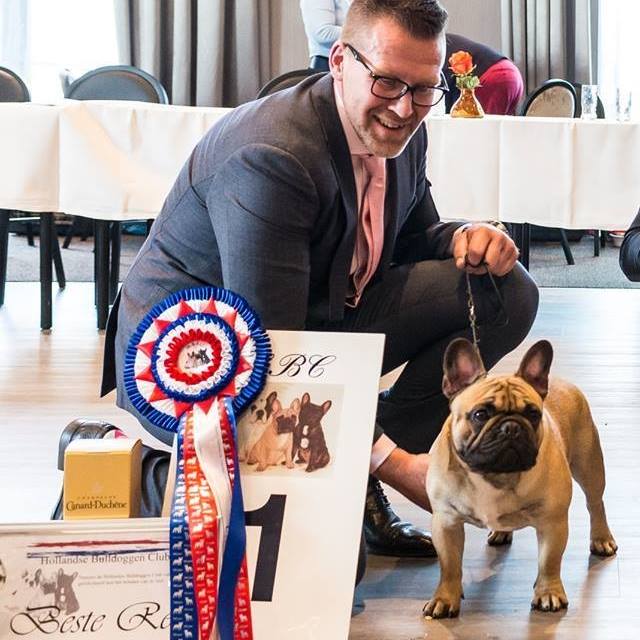 We want to thank the judges for thinking so highly about him and all who are involved.
Thank you Jerry de Vries for the pictures. 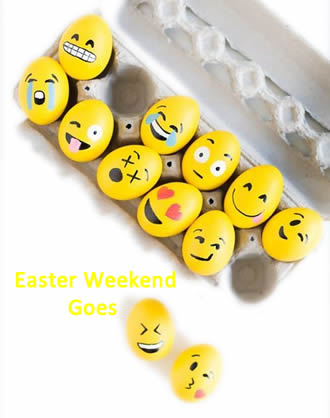 Let’s start with the typical Dutch weather, just one word needing for it COLD, but looking back on that weekend, we did not care about the weather at all, let me tell you why ……

First off all we love Easter eggs :-), but on a more serious note, we had a busy weekend with the International Dogshow in Goes (Nl) and of course we like to share our news with our visitors, so let’s start our story:

on this International Dogshow in Goes we took our young French Bulldog – Bakervil’s Style Mad Max ‘Rolo’ to compete in Junior Class. After winning his class he went on winning BEST MALE and BEST of BREED. At the end of the day it was time for the group judging of all groups (10). ‘Rolo’ went on WINNING GROUP 9 and became 3rd BEST IN SHOW. This means also that ‘Rolo’ is qualified for the Top Dog of the Year of the Dutch Kennelclub. This can be called an exceptional result for a youngster at only 13,5 months old!
‘Rolo’was judged by Drs. H.O. Hoenderken & Mrs S. Burns. 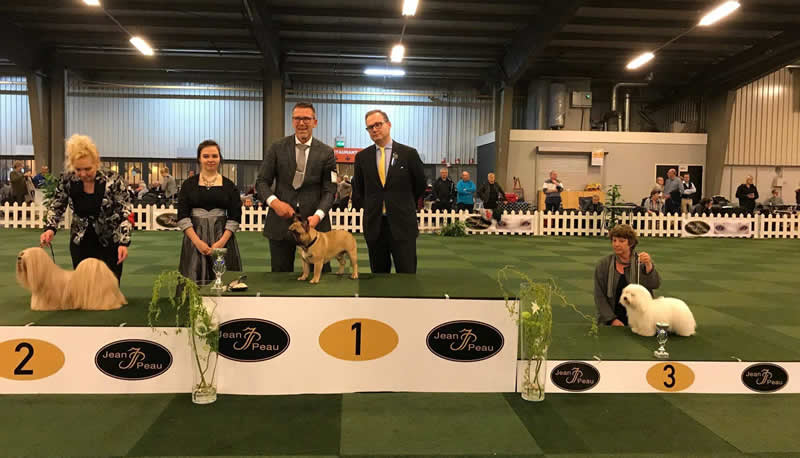 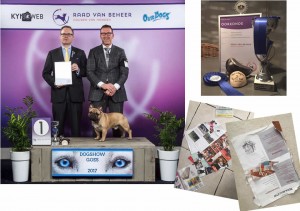 But this isn’t all our news, it continues with …….

So obvious we didn’t care about cold Easter weather in 2017, who can blame us …..

with a nice artwork of our youngster Dutch Youth Champion ‘Bakervill’s Style Mad Max ‘Rolo’. It is rather special to us that he gained his Dutch Youth Championship in just three months (even a little less than three months 😉 ) on the  following Dutch shows; Christmas Show 2016, end of december; Eindhoven February 2017 & Groningen March 2017.
Our guess is one can imagine our pride of this lovely young boy!

The weekend of March 3th-4th was a great weekend for us and worth the ‘long’ drive to the Northern Netherlands, an overview of this weekend 🙂 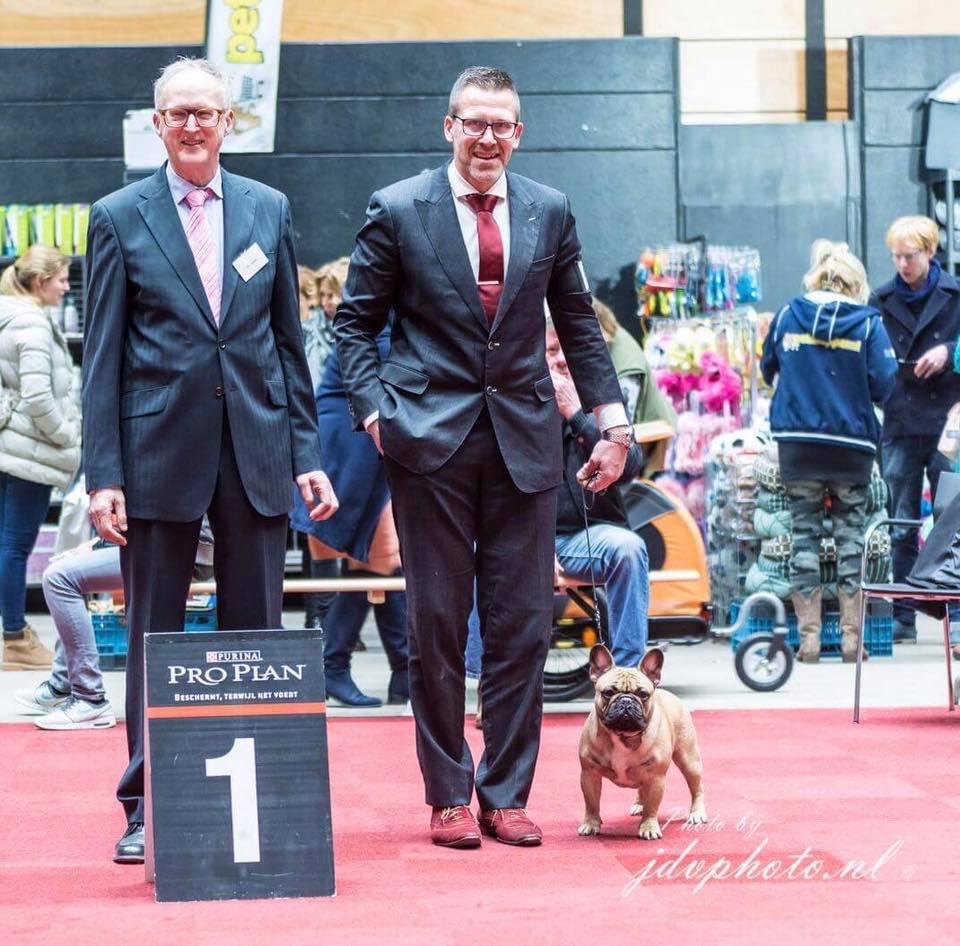 We started our saturday  at the International Dogshow in groningen with  the  young Frenchie called ‘Bakervill’s Style Mad Max ‘Rolo’, at the age of almost one year this boy can call himself Dutch Junior Champion after this show. It took him only 3 shows to gain this title. But that is not all ….. he even reached the ring of honor by becoming Best Male and Best of Breed. In the ring of honor this young boy was picked with the last seven ♥

Another thank you for the nice pictures Jerry!! 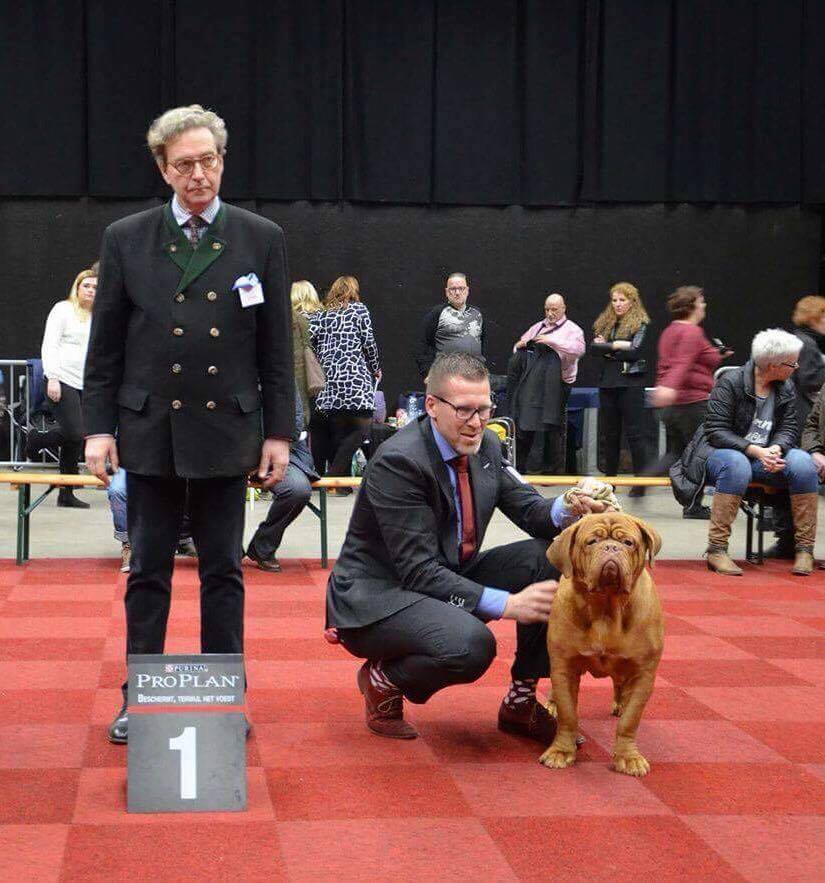 After this fantastic first day the second day was almost just as good. On  Sunday  it was Mambo Jambo time  Bakervill’s Style Mambo Jambo “Mambo”, also almost 1 year old took: first Place in Junior Class and & Reserve Best Female, on top of this she received the CAC. She was judged by Mr. C. Habig (Germany) who said some lovely words about our young lady 👍👍 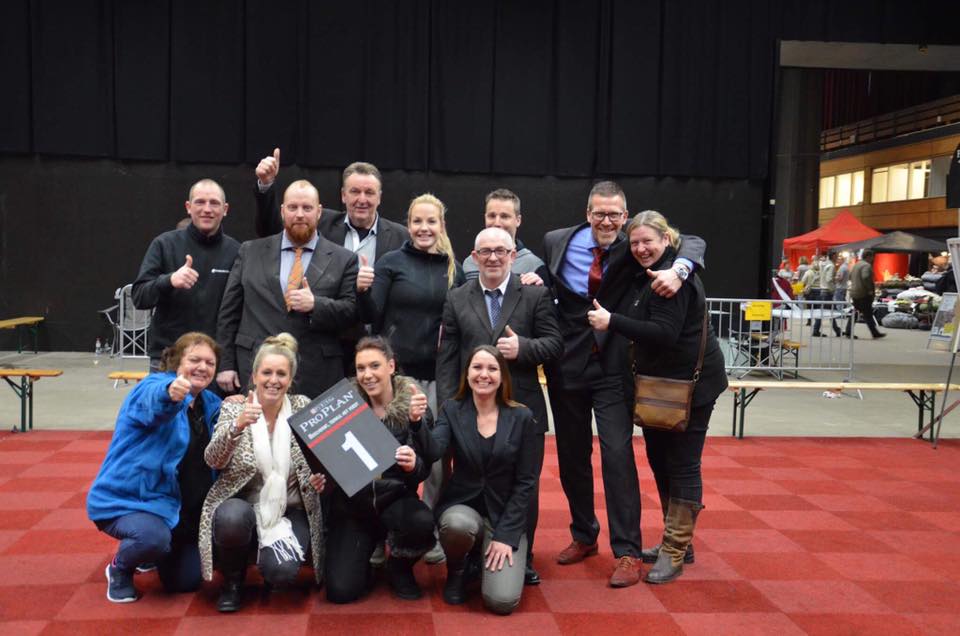 We had a fantastic weekend with our dogue friends, as the picture below shows 😉 we really enjoyed the time we spend together 🙂

Thanx to Richard Keizer for the pictures

We visited the competition for FRENCH BULLDOG OF THE YEAR 2016. We enjoyed the French Bulldog of the Year Show 2016 very much.
Only the best Frenchies 0f 2016 battle for this title and, well ………….. 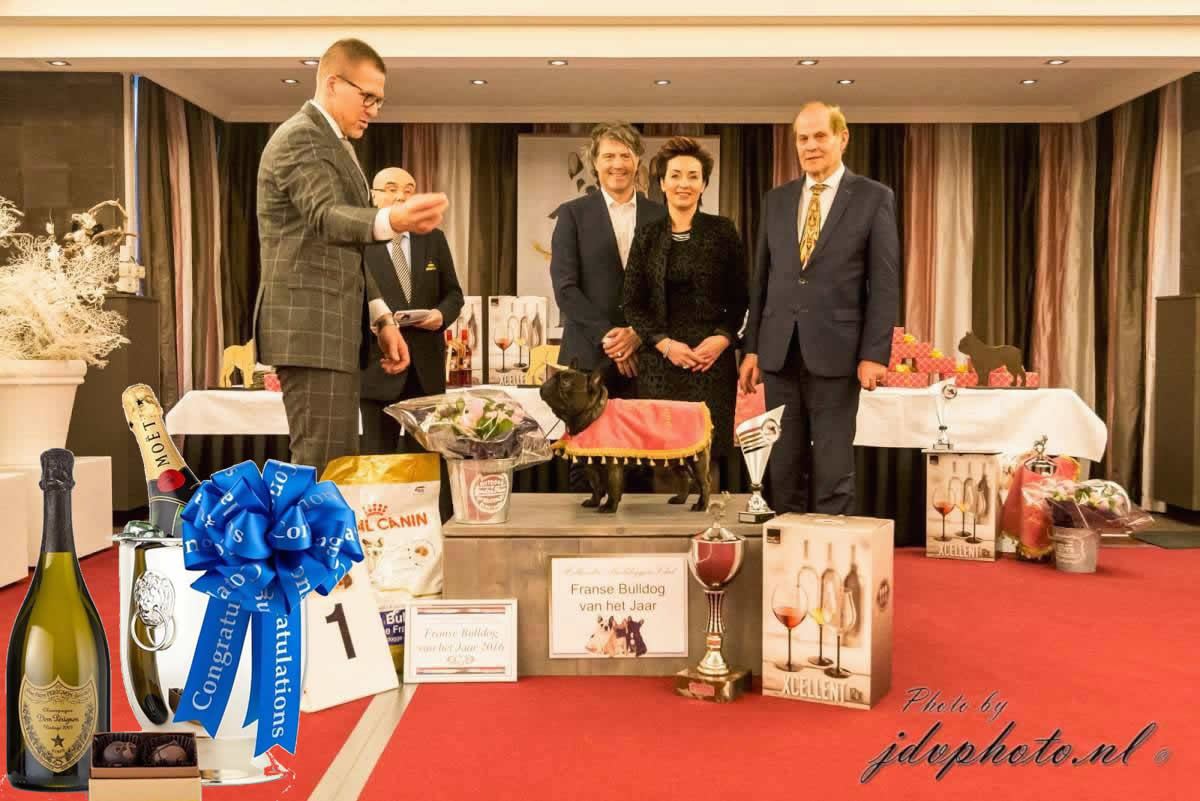 second year in a row Bakervill’s Style Illuminati -Joe-, owned by D. van Raamsdonk-
won the title Dutch Bulldog of the year , and he can again proudly call himself Top French Bulldog 2016!

Thanks to everyone involved X

First of all we like to say thank you to all friends who supported us last year again ♥ thank you ♥.

Of course there is not much 2017 dogue news to share on the first day of the year, well maybe some good news is we found ourselves a fanatic webmaster, who seems to can’t wait to update the website 😉

We start this year with just a lovely picture 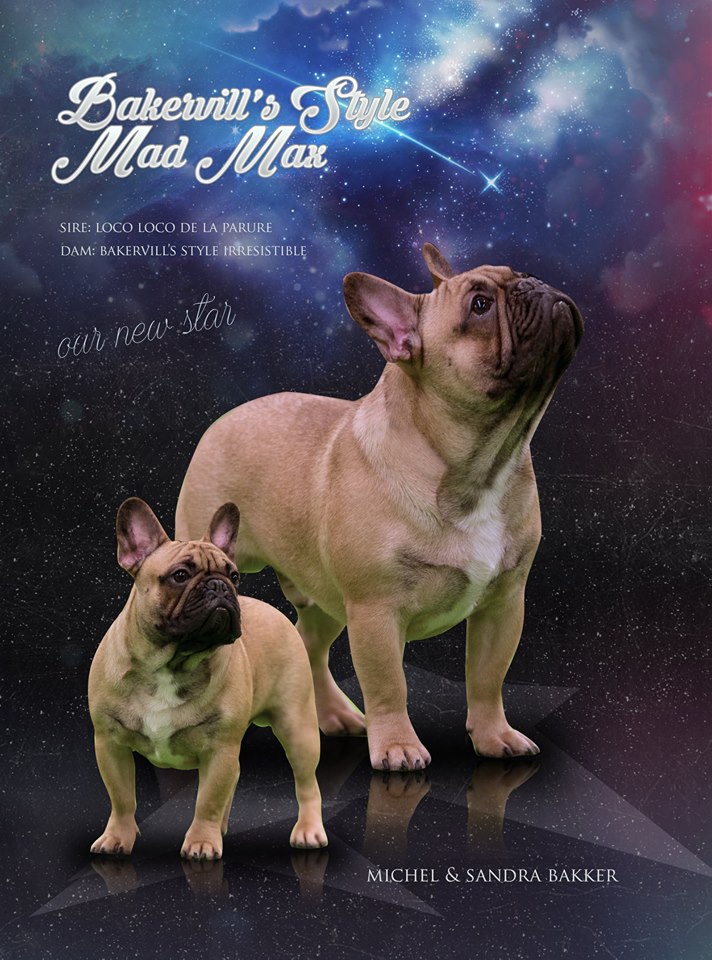