Just a little more about us …. 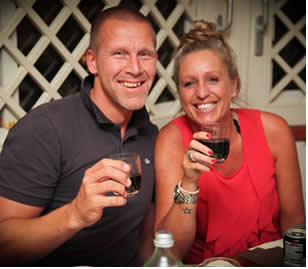 As mentioned before we are Michel & Sandra Bakker. We have our home in a small village called Schoonrewoerd, in the middle of the Netherlands.
An important mindset to us is: The Best things in life are worth waiting for; especially concerning our  Passion for the Dogue de Bordeaux!

Bakervill’s start
In 1994 we started looking for a dog and we had different breeds in mind:  the English Mastiff, the Mastino Napolitano, the Bullmastiff and the Dogue de Bordeaux. After reading, visiting shows, watching dogs and talking to different people in the breeds we decided that the Dogue de Bordeaux is our breed (never regretted that decission for  a second).

By the way, in our opinion it is nowadays still far most is the best way before deciding to buy a dog!!

We bought our first Dogue de Bordeaux – Blockheads Aquilla Hooch – from Betty Straatman-Rol, he was the last one available in the litter, but for us he was the first pick of the litter, from the start on we were completely in love with him and kept an eye on this fantastic boy, every time we visited the litter.

When we bought this puppy-boy all we wanted was a pet, just for companionship, never thought about entering dogshows. But Betty had one important condition. We (as were the other new puppy owners) were obliged to enter Hooch on the Junior Dog Day from the N.M.M.C. -the breedclub at that time, because in her opinion it would be nice to have a look at the complete litter after a few months, and this was a nice event for owners and dogues. The judge made a realy nice report about Hooch and we decided to enter him at the big Winner Show later that year in Amsterdam and he received a placement in a very large class, so proud that is how we felt at that time. When he was a big boy Hooch became Dutch Champion, our first baby dog became champion. That was a very special moment. ♥

Nowadays, 20 years later, you can say things went slightly different since 1994………… we were- and still are infected with the Dogue de Bordeaux virus. Another good reason for delving into a dogbreed before buying might be the friendship with Betty, the breeder of our first Dogue puppy, which still is close and a big part of our dogue-virus is the friendship with breeders around the world!

Blockheads Hooch
Once Hooch became champion, and had some fantastic health results, breeders start asking for breedings. Well as people might know we are not giving so much studservice with our dogs. Our opinion is that we have to like the combination of (one of our) male(s) with a female. We think Hooch did about 10 breeding in total. He was a realy good producer, only a few names to mention; Paola de la Maison de Hollande – Junior World Champion and World Champion,  Pebbles de la Maison de Hollande  who became Reserve World Champion (bred by Gerard & Sheryl van ’t Hul) and Multi Multi Champion Brandoux Toezzz, who was bred by Alan Bates.  Toezzz ended up in our house, he is a dog never to be forgotten.

The V- litter
This was our first Bakervill’s Style litter with Multi Champion Brandoux Calaix, born in 2004. Calaix was born out of Laruscades Bibi and Seignorie Kwan de la Seigneurie des Chartrons. After looking  around for a while our eye was caught by a male, that many people who are in the breed for a bit longer all know – Temple Felson -.
This first litter is what people in the Dartsport World would describe as an 180…!! (a pity we can not add sound to the number) 🙂
Calaix gave birth to seven pups, five of them became Champion or Multi Champion in countries all over the World – Viski, Vienna, Vasco, Valton and Verona, from which Viski and Vienna are probably the most well-known. We decided to have Viski living in Moscow in co-ownership with our good friends in Moscow where he stayed with his second mum Irina Ketova. Every now and then he had a vacation in our home through the years.

Crufts
There are dogshows and DOGSHOWS, but to us there is only one place on earth that breaths dogs; CRUFTS!
The first time we visited Crufts with our friend Alan Bates, we didn’t know what hit us, so many dogs, such a big show and such a nice admosphere. At that point the Dogue de Bordeaux was not even allowed to be shown on Crufts because they were still on the import register. ( I never forget calling The English Kennel Club to ask them how to enter my Dogue de Bordeaux for Crufts and the woman on the other side saying that is wasn’t possible. I replied to the woman that i have tickets in my hand an that my dog was qualifited for Crufts on several big shows on the continent). When Alan and us were walking around at Crufts the 3 of us started to dream about running at Crufts on the green carpet with our dogs but it would take a few years more.

Our first time was with Honey Bee del Tridentum a female from the last litter of Brandoux Toezzz. Honey qualified for Crufts at the International Dogshow in Dortmund. She made us all proud taking Reserve Best Female at Crufts which gave an amazing feeling that can’t be described. She was judged by Mr. A. Bicknell from England.
Some years later in 2013 we returned with a son of Honey Bee del Tridentum; Bakervill’s Style Funky Boy -Toto- who had at that time, at his young age very impressive show career already. 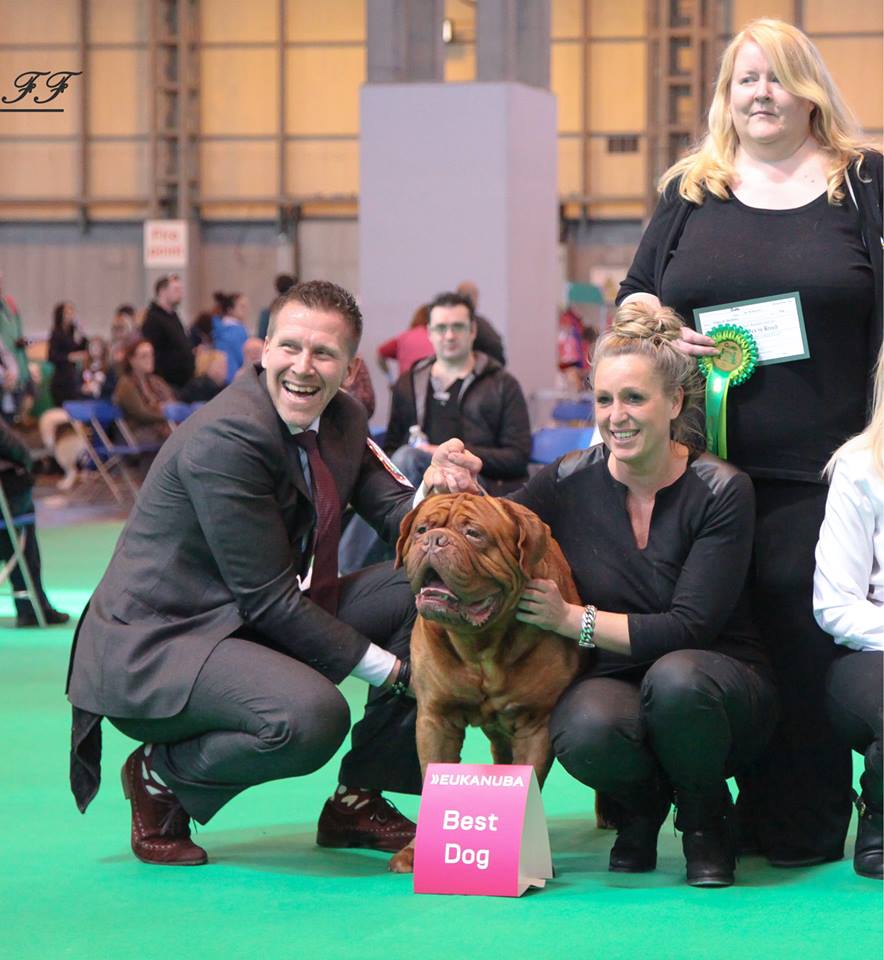 2014 … a year later, Toto returned to Crufts and again he won taking Best Male this time under Mr. B. Bosch from Belgium.

2015 … this year still give us goosebumps. Nobody expected Toto’s returning to “defend” the Crufts title because he won already 2 times and was almost 5 years old so it was a big surprise for everybody when he entered the showring. The unbelievable thing happened for the 3rd year in a row Bakervill’s Style Funky Boy -Toto- won the Crufts title and ended up with BEST OF BREED under Mrs. C. Cavanagh. And also not to forget our lovely female Bakervill’s Style Honkey Tonk Woman taking Reserve Best Female, just like her grandmother Honey Bee del Tridentum did in 2011.

Bakervilll’s showcarreer
As mentioned before our first steps in showing dogs were made in the Netherlands with our first Dogue de Bordeaux Blockheads Aquilla “Hooch” followed by the shows all over Europe with Brandoux Toezzz. Who had an impressive list of wins all over Europe; Junior World Champion, European Champion, Clubwinner titles and many country championships. At the same time we started showing with Brandoux Calaix who became  European Champion and won at 3 clubshows in Germany, Italy and the Netherlands in one year.

Like a Dutch proverb says; The Apple doesn’t fall far from the tree….

Honey Bee del Tridentum was bred in Italy and was out of the last litter that was sired by Brandoux Toezzz. Like her father she made us very proud with her showcareer – Reserve Best female on Crufts, Dutch Jr. and Dutch Champion and Best Female at the Italian Clubmatch.

Honey Bee gave birth to the famous F-litter that was very well  presented at the World Dogshow 2011 in Paris. Bakervill’s Style Funky Boy “Toto” became Junior World Champion and Best Junior and his sister Bakervill’s Style Flabbergasted “Flabber” became also Junior World Champion. Later that year Toto took the Junior European title and became Best Male and in the final Best Junior in Group 2. Toto’s show wins and titles are to many to be mentioned and he is still showing on special occacions.

At the moment we are showing with brother ans sister from our H-litter; Bakervill’s Style Hot Chilli “Snap” and Bakervill’s Style Honkey Tonk Woman “Pipo” children from our Bakervill’s Style Fear Factor “Nena” who became Resere Junior World Champion in France and Dutch Junior Champion. They took several Junior Titles but the most impressive was when they took the double in 2013 at the European Dogshow in Geneva under Mrs. C. Molinari from Portugal. In the years to follow they kept on winning througout Europe. Snaps European title in Brno – Tsjechie in 2014 and probably one (at the time of rewriting it is two) of the most specials wins was his win at the Top Dog of the Yearshow in the Netherlands., two times in a row, 2015 and 2016! This show can only be entered by dogs that were placed 1-2- or 3 in Group 2 (which has about 60 different breeds) at the Dutch shows and the Clubwinner – The Top of the Bill – . At this show the dogs are shown on a big cat-walk with Music and Spotlights. A real Show, so to say. Snap beat all the togdogs of Group 2 from 2014 & 2015. One of Snap’s lastest winnings was at the biggest Molossershow in the World taking Best of Breed and 3rd Best in Show again something that can be scrached of the bucketlist.

In between all the dogues news, almost forgot to mention …. We got married in 2004!  Oeps ♥

Passion for the breed
Winning at shows is nice but not the most important thing. Enjoying your dogs like they are part of the family is far more important to us. The other goal is trying to improve what you have got, another important keystone, we think! We hope we can help preserving the breed for the future in our own way.

It was 2009, finally a wish came true for me -Sandra-, our first French Bulldog –Pip– made her entry into our pack of dogues. It took me many years to convince Michel this would be the most perfect combination, and until today he agrees 🙂 .

Nowadays medio 2016, we enjoy it very much to not only enter our Dogues de Bordeaux, but also our Frenchie Bakervill’s Style Illuminati -Joe- into the showring. We are proud of Joe doing very well in the Showring. He is a lovely male.

Could it be that the position we are in nowadays, in 2016, is the result of ‘just’ two important mindsets for us?

The Best things in life are worth waiting for & True dedication……